Our first night on the street at the steps of City Hall was a great success. We preached, no only to the homeless which came in large numbers, but also to passers by and business men that Street Church partnered with. That day eleven people came to Christ, praise God! Some people kneeling on th ground weeped for salvation. I was waiting for some time for such a manifestation of God’s anointing. All of this in front of business people and the media. What a witness.

Through the coarse of the day we fed and preached to hundreds. Thousands in their cars and those walking by saw the name of Jesus lifted high. Isn’t that what it is all about? To lift the name of Jesus up? This did not come without a cost, which we rejoice in. We were again harassed by bylaw officers, and were issued another ticket. For two reasons, this is awesome. Maybe for the first time, after years of lies from City hall, the truth is being exposed. Even though we have not used amplification for three months, every week we receive a ticket ranging from $300 – $1000 in the service of feeding the poor. Are you shocked? You shouldn’t be. We were saying from the very beginning that the issue was not an amplification issue (not one ticket for breeching acceptable noise levels).

It was and is an attack on the preaching of the gospel. I welcome those tickets with joy. Not only because Jesus said blessed are those who are wrongly accused and persecuted for righteousness sake, and that great is our reward in heaven, but also that now we have many tangible proofs for the courts and the public to expose their corruption and manipulation. The truth shall set you free.

During our night on the street event we had a wonderful time with the Lord. God showed up in a big way. We lit torches for the lord, prayed, sang, and ministered to the homeless. Think for a minute. Who in the natural way would sleep on the concrete sidewalk with sprinklers turning on getting them wet, sleeping next to hookers, drug dealers, drunks, drug addicts, etc? Is that not crazy? No, it’s not. If you have Jesus Christ, the Hope of Glory and the love of God in your heart. Jesus was called a friend of sinners. If we are followers of Jesus, should we not also love the unlovable? Should we not be the hands and feet of Christ himself? Remember, He loved them all (and even you and I) and He still does.

We had a tremendous time on a Jericho walk around City hall and also the police station. Imagine people walking with torches, and I mean torches (flames representing the fire and the light of God). When I looked at that I prayed double. When we started the Jericho walk there were a good number of us, but what was an awesome thing was that as we walked, God brought people from different places to the very place we were in our walk to join us in storming the heavenlies. We even had a barefoot homeless woman join us for one of the laps. As we walked, God had His herald leading the way. A man by the name of Morris, a former drug dealer and user, who has been greatly transformed by the power and love of the Living God. This herald of the Lord was holding a large flag which said God, Lord Jesus Christ, the only way to heaven. Isn’t God awesome? Not only did he march with the flag but he danced, skipped, sang and shouted JESUS! Wow, very powerful experience. I wish that you could have been there to experience what God was doing in the spirit.

We stayed and prayed all night. The street people were so grateful that anyone cared enough for them to make this stand. For the first time in a very long time, the homeless were able to get a full nights sleep in peace knowing that they were safe from any potential harm (remember two homeless people do die on our streets every single week).

Some of the politicians and business people, seeing this double standard have committed to raising awareness, and have committed to help Street Church financially. What the enemy meant for evil, God has spun for good. I love my Jesus, He always does this. He slaps the devil in the face all the time.

At our Wednesday location, when we bring all the enlarged tickets, finally we are seeing some shifting. There are many citizens, literally shocked by what they see. They can’t believe that this mayor and the City representatives are doing such wicked things. They have heard on thing through the media reports, believing that we are law breakers, but now they see the actual evidence proving that it is all lies with their own eyes. They see that the City is trying to destroy something that is so positive and good, like ministering to the needs of the poor. The most common comment from them is, “What’s wrong with this city.” Were we not saying, from the beginning, that sooner or later, this would turn around? God sometimes takes time, but the truth will always come forth.

I don’t know if you noticed that our second park has been fenced. The first one Siemens was fenced before – the reason archaeological site, which turned out to be a farce. They later took the fence down to once again put it back up, the reason being that they are now building a road. After the closure of Siemens Park, we had moved back to Triangle Park only to later find that this Park too is now fenced.

After much prayer and seeking the will of God, not being able to find an alternative site to minister to the needs of the poor, and after unsuccessful reasoning with our City officials, we find ourselves at the steps of City hall on Sunday. God works in mysterious ways.

Today marked the first Sunday service at the steps of City hall. We had an amazing time, the homeless loved it. We preached, we sang, we prayed and we fed every homeless person that came.

Praise God for His amazing ways, they are much higher than ours. If you think about it, we are at the gates of this city, the gospel is being preached, the name of Jesus lifted high, the ten commandments are presented as a reminder of God’s law and a reminder to us of His grace and mercy that is much needed because we have all fallen short of His glory. This reminds me of Mordecai sitting, calling upon God’s righteousness and raising His voice for all people called by God’s name raise up, and stand up.

We could continue with more updates, but for that we would probably need to write a book, there are so many things that God is doing. There are so many testimonies on a daily basis. I don’t recall a day without someone coming to us with a praise reports of what mighty things Jesus did in their lives.

Just to lift your spirits, and as a small reminder that the speakers were needed, we want to share one more story with you. Two weeks ago, there was a man that came to us and said “You don’t know me, but you saved my life. During the cold winter weather, I was under the bridge literally freezing to death. I could not move my legs. My arms were numb, and I knew that I was dying, freezing to death. Suddenly, I heard this voice. First, was a trumpet and then you were saying through the speakers, that God loves you, God loves you, Jesus died for you. Immediately, supernatural strength came into my body, and I managed to stand up and go to the shelter. Today, I just want to let you know that if it was not for the fact that I heard your message, I would not be alive today.” As he was telling me this story, the tears did not stop streaming down his face. So, the next time you are wondering if the speakers were a tool of God to touch hearts and lives, remember the man who almost died and would have if not for the fact that he could HEAR the message of the Hope and Love. 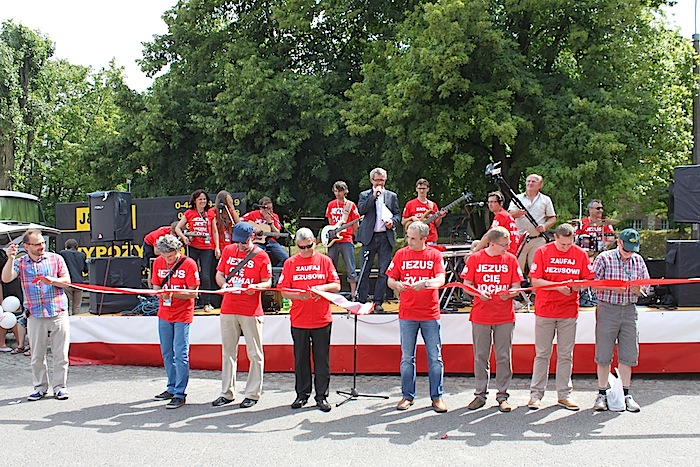 Jennifer Rau – What is Street Church?

December 10, 2015 Artur Pawlowski Comments Off on Jennifer Rau – What is Street Church?

September 15, 2013 Artur Pawlowski Comments Off on Flooding, the Gentle Reminder