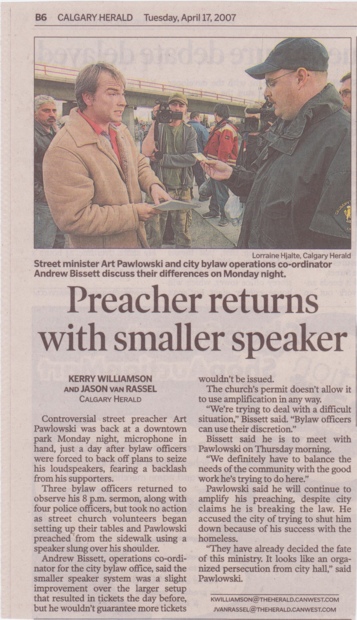 Controversial street preacher Art Pawlowski was back at a downtown park Monday night, microphone in hand, just a day after bylaw officers were forced to back off plans to seize his loudspeakers, fearing a backlash from his supporters.

Three bylaw officers returned to observe his 8 p.m, sermon, along with four police officers, but took no action as street church volunteers began setting up their tables and Pawlowski preached from the sidewalk using a speaker slung over his shoulder.

Andrew Bissett, operations co-ordi-nator for the city bylaw office, said the smaller speaker system was a slight improvement over the larger setup that resulted in tickets the day before, but he wouldn’t guarantee more tickets wouldn’t be issued.

The church’s permit doesn’t allow it to use amplification in any way. ”We’re trying to deal with a difficult situation," Bissett said. "Bylaw officers can use their discretion." Bissett said he is to meet with Pawlowski on Thursday morning. ”We definitely have to balance the needs of the community with the good work he’s trying to do here:’

Pawlowski said he will continue to amplify his preaching, despite city claims he is breaking the law. He accused the city of trying to shut him down because of his success with the homeless. "They have already decided the fate of this ministry.

It looks like an organized persecution from city hall," said Pawlowski.