Each July, the City of Calgary in Alberta, Canada hosts one of the biggest cowboy shows on earth — the Calgary Stampede — featuring everything from bull riding to chuck wagon races. This year the show ran from July 5th to 14th.

The Stampede also holds an annual parade and each year, Calgary Pastor Arthur Pawlowski has a fight on his hand when it comes to promoting the name of Jesus in the parade.

In an interview with Ezra Levant, Pastor Pawlowski says he was told by Stampede officials his group could participate in the parade but wouldn’t be allowed to put the name of Jesus on any banners or cards decorating their float. The reason: Stampede officials said the “Name of Jesus” offends people.

Below is an interview, Pastor Pawlowski had with Sun News Ezra Levant.

Pastor Artur Pawlowski grew up under communist rule and believes in freedom. He pastors The Street Church, which ministers to Calgary’s homeless both physically and spiritually.

This is not the first time he has run into trouble for preaching and praying in public.

In December 2011, Pawlowski was arrested for holding a Christmas service in Calgary’s public atrium. Calgary’s mayor Naheed Nenshi ordered Pawlowski and his group arrested. However, what was repeatedly pointed out is why does the major choose to have Christians arrested while allowing Occupy Protestors to set up camps for weeks on public property?

Is this persecution? Well, here is what the judges have to say about the City of Calgary’s action, as reported by Sun News:

Don’t take Pawlowski’s word for it. Judge after judge has condemned the city’s behaviour. One trial judge said the city bylaw officers engaged in “abusive conduct.”

This year [2012], an appeal judge said the city’s bullying of Pawlowski came “precariously close to being excessive and an abuse of power.”

In 2006, Pawlowski spent a night in jail for preaching at Calgary’s Fringe Festival in Calgary. But it wasn’t in an offensive way, in fact, Pawlowski videos all his public preaching with videos and as a result has successfully won his cases when arrested by the police. 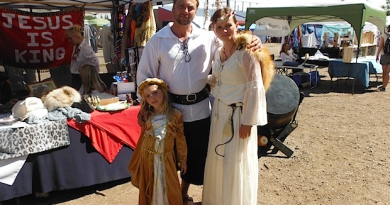