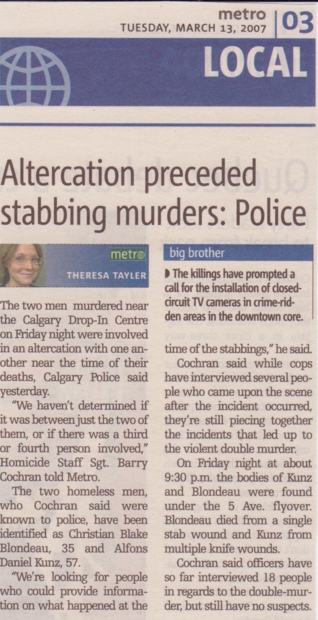 The two men murdered near the Calgary Drop-In Centre on Friday night were involved in an altercation with one another near the time of their deaths, Calgary Police said yesterday.

"We haven’t determined if it was betweenjust the two of them, or if there was a third or fourth person involved," Homicide Staff Sgt. Barry Cochran told Metro.

The two homeless men, who Cochran said were known to police, have been identified as Christian Blake Blondeau, 35 and Alfons Daniel Kunz, 57.

‘We’re looking for people who could provide information on what happened at the of the stabbings,"he said.

Cochran said while cops have interviewed several people who came upon the scene after the incident occurred, they’re still piecing together the incidents that led up to the violent double murder.

On Friday night at about 9:30 p.m. the bodies of Kunz and Blondeau were found under the 5 Ave. flyover. Blondeau died from a single stab wound and Kunz from multiple knife wounds.

Cochran said officers have so far interviewed 18 people in regards to the double-murder, but still have no suspects. Jesus lifted up in Stampede parade