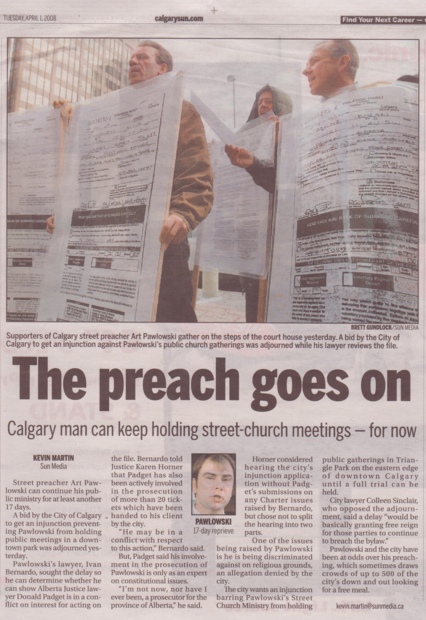 A bid by the City of Calgary to get an injunction prevent¬ing Pawlowski from holding public meetings in a down¬town park was adjourned yes¬terday.

Pawlowski’s lawyer, Ivan Bernardo, sought the delay so he can determine whether he can show Alberta Justice law¬yer Donald Padget is in a con¬flict on interest for acting on the file. Bernardo told Justice Karen Horner that Padget has also been actively involved in the prosecution of more than 20 tick¬ets which have been handed to his client by the city.

"He may be in a 17-dayreprieve conflict with respect to this action;’ Bernardo said.

But, Padget said his involve-ment in the prosecution of Pawlowski is only as an expert on constitutional issues. "I’m not now, nor have I ever been, a prosecutor for the province of Alberta;’ he said.Horner considered hearing the’city’s injunction applica¬tion without Padg¬et’s submissions on any Charter issues raised by Bernardo, but chose not to split the hearing into two parts.

One of the issues being raised by Pawlowski is he is being discriminated against on religious grounds, an allegation denied by the city. The city wants an injunction barring Pawlowski’s Street Church Ministry from holding public gatherings in Trian¬gle Park on the eastern edge of downtown Calgary until a full trial can be held.

City lawyer Colleen Sinclair, who opposed the adjourn¬ment, said a delay "would be basically granting free reign for those parties to continue to breach the bylaw:’ Pawlowski and the city have been at odds over his preach¬ing, which sometimes draws crowds of up to 500 of the city’s down and out looking for a free meal.