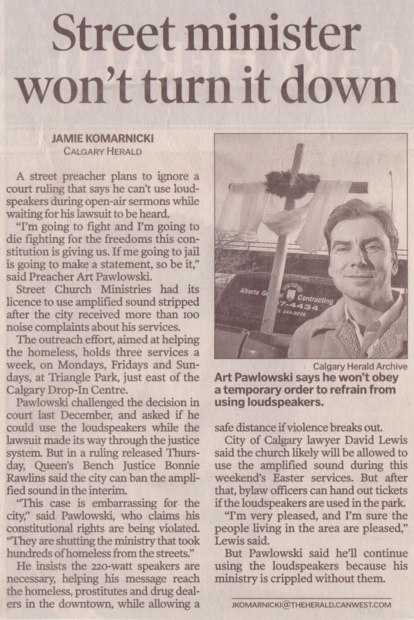 A Street minister won’t turn it down

A street preacher plans to ignore a court ruling that says he can’t use loud-speakers during open-air sermons while waiting for his lawsuit to be heard.

"I’m going to fight and I’m going to die fighting for the freedoms this con-stitution is giving us. If me going to jail is going to make a statement, so be it," said Preacher Art Pawlowski.

Street Church Ministries had its licence to use amplified sound stripped after the city received more than 100 noise complaints about his services. The outreach effort, aimed at helping the homeless, holds three services a week, on Mondays, Fridays and Sun-days, at Triangle Park, just east of the Calgary Drop-In Centre. Pawlowski challenged the decision in court last December, and asked if he could use the loudspeakers while the lawsuit made its way through the justice system.

But in a ruling released Thurs-day, Queen’s Bench Justice Bonnie Rawlins said the city can ban the ampli-fied sound in the interim. "This case is embarrassing for the city," said Pawlowski, who claims his constitutional rights are being violated. "They are shutting the ministry that took hundreds of homeless from the streets." He insists the 22O-watt speakers are necessary, helping his message reach the homeless, prostitutes and drug deal¬ers in the downtown, while allowing a safe distance if violence breaks out.

City of Calgary lawyer David Lewis said the church likely will be allowed to use the amplified sound during this weekend’s Easter services. But after that, bylaw officers can hand out tickets if the loudspeakers are used in the park. "I’m very pleased, and I’m sure the people living in the area are pleased," Lewis said.

But Pawlowski said he’ll continue using the loudspeakers because his ministry is crippled without them.