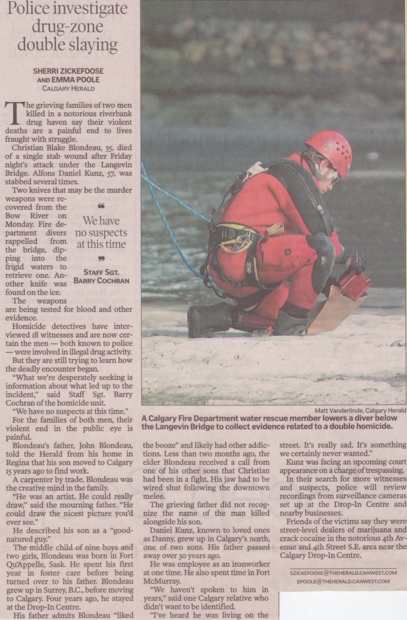 The grieving families of two men killed in a notorious riverbank drug haven say their violent deaths are a painful end to lives fraught with struggle.

Two knives that may be the murder weapons were recovered from the Bow River on Monday. Fire department divers rappelled from the bridge, dipping into the frigid waters to retrieve one. Another knife was found on the ice.

The weapons are being tested for blood and other evidence.

Homicide detectives have interviewed 18 witnesses and are now certain the men – both known to police – were involved in illegal drug activity.

But they are still trying to learn how the deadly encounter beg, "What we’re desperately seeking is information about what led up to the incident," said Staff Sgt. Barry Cochran of the homicide unit.

"We have no suspects at this time." For the families of both men, their violent end in the public eye is painful.

Blondeau’s father, John Blondeau, told the Herald from his home in Regina that his son moved to Calgary 15 years ago to fmd work.

A carpenter by trade, Blondeau was the creative mind in the family.

"He was an artist. He could really draw," said the mourning father. "He could draw the nicest picture you’d ever see."

He described his son as a "good natured guy."

The middle child of nine boys and two girls, Blondeau was born in Fort Qu’Appelle, Sask. He spent his first year in foster care before being turned over to his father. Blondeau grew up in Surrey, B.C., before moving to Calgary.

Four years ago, he stayed at the Drop-In Centre.

His father admits Blondeau "liked the booze" and likely had other addic-tions. Less than two months ago, the elder Blondeau received a call from one of his other sons that Christian had been in a fight. His jaw had to be wired shut following the downtown melee.

The grieving father did not recognize the name of the man killed alongside his son.

Daniel Kunz, known to loved ones as Darmy, grew up in Calgary’s north, one of two sons. His father passed away over 30 years ago.

He was employee as an ironworker at one time. He also spent time in Fort McMurray.

"We haven’t spoken to him in years," said one Calgary relative who didn’t want to be identified, "I’ve heard he was living on the street. It’s really sad. It’s something we certainly never wanted."

Kunz was facing an upcoming court appearance on a charge of trespassing.

In their search for more witnesses and suspects, police will review recordings from surveillance cameras set up at the Drop-In Centre and nearby businesses.

Friends of the victims say they were street-level dealers of marijuana and crack cocaine in the notorious 4th Avenue and 4th Street S.E. area near the Calgary Drop-In Centre. I have a question for you O Calgary!