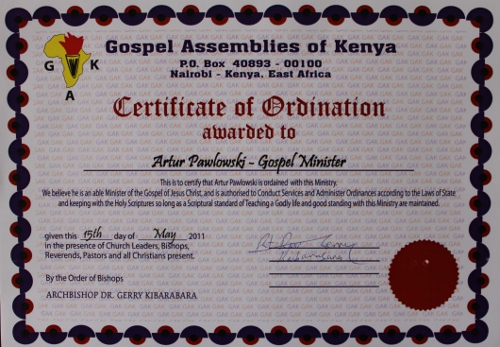 Archbishop Dr. Gerry Kibarabara, the secretary general of United Christian Churches of Kenya’s Supreme Council, recently hosted Calgary street preacher Artur Pawlowski on an African crusade where he got to see first hand and for the first time the impact that his ministry’s founding and supporting role of an African orphanage, school, medical clinic, church and evangelistic street ministry has had on Africans. Pawlowski was received openly and was encouraged to find out that the African Archbishop was aware of the constitutional battles for religious freedom in Canada that Artur and his ministry have been fighting.

As a man who was actively involved in the fight for freedom and independence in the Kenyan Mau Mau Uprising between 1952 and 1960, and one who himself has stood for Christian beliefs in the political and business community in Africa, Archbishop Kibarabara really appreciated Pawlowski’s commitment to stand for freedom and democracy. Due to Pawlowski’s influence for the Christian community in Kenya and abroad the Archbishop presented Calgary’s street preacher with an honorary Kenyan ordination.

“I am greatly honoured and humbled by this ordination and amazed at how far reaching our little contribution has been to the population of Kenya. It’s strange to me how in both Europe and Africa we are embraced and appreciated for our commitment and resilience in fighting for what is good, but in Canada, we meet with resistance and opposition from the very people we are fighting for. It reminds me of the words of Jesus, where He stated that ‘the prophet has no honour in his own country’,” stated Pawlowski.

Artur Pawlowski is presently working on putting together a chicken farm for various feeding programs in the capital city of Nairobi and is raising funds for deep water drills in an effort to bring fresh drinking water to various communities throughout Kenya.

The rest of the team that was in Kenya with Pawlowski were presented with “Certificate of Appreciation” for their participation in assisting Kenyans with humanitarian work.

“I believe in investing in people’s lives wherever they may be. It’s a great honour to be able to help people in need, especially in Africa. I was so impressed at how far the dollar goes there. They are doing so much with so little. We really could learn quite a bit from them,” said Pawlowski.

For those interested in lending support to Street Church in their effort to purchase and run a chicken farm for a Kenyan food program and to purchase and operate a deep water drill to provide fresh water to many Kenyan communities, please contact Artur Pawlowski of Street Church Ministries at 403-607-4434 or e-mail [email protected] This e-mail address is being protected from spambots. You need JavaScript enabled to view it .

Kibarabara is well known in Kenya and is often called upon by government officials there to do swearing-in ceremonies and say prayers at the beginnings of meetings. opinion is sought and respected by those in power. But came from a much more humble beginning.Kibarabara said was, literally, born in a forest after mother went to gather firewood. gave birth deep in the forest and was surrounded by "leopards, monkeys – all kinds of animals," as Kibarabara put it. believed the gods of Mt. Kenya worshipped had forsaken and called out that if there be a mightier god, should save and child.Kibarabara said it was a miracle the two made it out of the woods – and a sign that life would one day have meaning. would have to wait for a while, though, before found true calling.

Kibarabara was raised from birth to be a warrior and help gain Kenya’s independence from Britain. said was trained to be a hardened warrior, to fight without emotion."I was told to never cry," said."For about 10 years, I was a very dangerous, bad man."For some reason, was afforded the opportunity to attend to school where began to think for himself and realized there must be another life for him. did."I applied the same principles of toughness and seriousness to my (pursuit of learning about) Christianity," said."I was always taught to take seriously anything I did."

is now one of the most respected religious men in Kenya.Kibarabara has preached and lectured in 85 countries.

"I believe in a wonderful God and take Jesus at word," said."It has become my whole life."