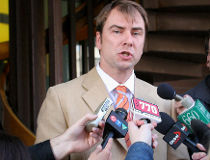 One month after being banned from the municipal building for holding a sermon in the public facility’s atrium, the group was back for a noon-hour sermon

Police and city security politely asked them to leave and the group left after about an hour.

They were handed notices that say they’re prohibited from tresspassing the building for one year.

Every local sports team and political party represented, everyone welcome at largest Pride parade ever in Calgary