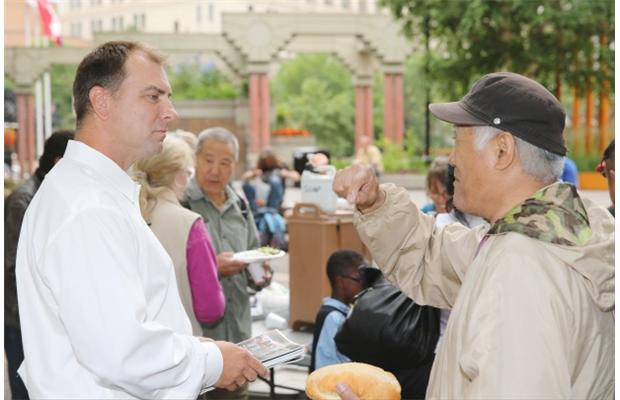 “Canada is a wonderful country, it was built on sound principles, and family is one of those principles. I know that Ric McIver wants to bring that to the table,” he said at a press conference outside Old City Hall.

Pawlowski said he would advocate for McIver throughout the race.

“Albertans would be stupid not to vote for that man.”

He also outlined his concerns with the other two Progressive Conservative candidates, Thomas Lukaszuk and Jim Prentice.

“Despite the fact that we are both Poles, I continue to have serious doubts about Thomas Lukaszuk and his commitments to fiscal responsibility, to moral standards and to the truth,” he said, while he criticized Prentice’s ties to Toronto-based communications firm Navigator Ltd. and its chairman Jaime Watt, a gay rights advocate.

The Street Church has openly condemned the gay community on its website. “They are not ashamed to declare the name of their master (Satan),” reads a blog post about the Calgary Pride Parade written by Pawlowski.

Last month, McIver came under fire for walking in the organization’s March for Jesus, which he later apologized for.

“I didn’t check the website, with all of this, you know, ugly … nasty mean-spirited stuff on this website that there is no excuse for, and I apologize for drawing attention to it,” he said at the time, adding he would not be participating in future marches barring a change in church leadership.

Pawlowski said many Albertans were disappointed by McIver’s decision to distance himself from the church, but that he understood the need to bow to political pressure. “We have in the Bible, very similar circumstances when the apostle Peter denied Christ three times,” he said.

A spokeswoman for McIver said Pawlowski would have no part in the campaign and that McIver, a Roman Catholic, has never been a member of the Street Church.

Here is my entire statement given to the media: