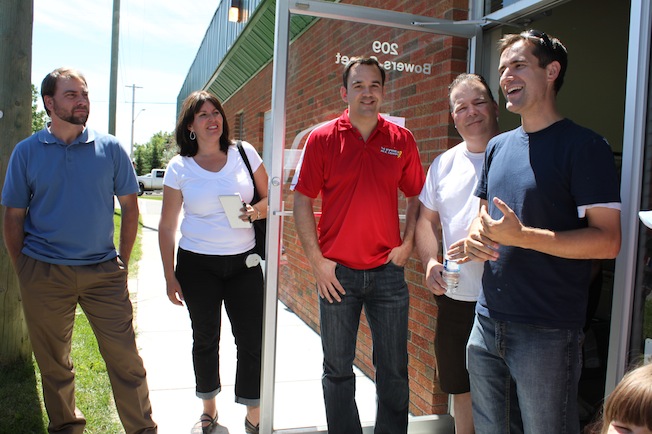 A bevy of volunteers filled about 15 trucks and two trailers with water, food, baby supplies, bug spray and toiletries for the Stoney Nakoda Nation, June 26.

The convoy, organized by MLA Rob Anderson, attracted representatives from all three levels of government, including Mayor Peter Brown, MP Blake Richards and Laureen Harper, the prime minister’s wife who was in the area helping with flood relief efforts.

“It’s been awesome,” said Anderson outside his office on Bowers St., where the effort took place.

“I just realized there is a huge amount of desire to help in Airdrie. We feel obviously lucky to have escaped flooding here in Airdrie and people want to help.”

The Wednesday effort was a continuation of Anderson’s efforts, which began June 23 with a convoy to the Siksika Nation, which was heavily damaged in recent floods. The efforts have been organized via social media and email, with many residents from as far as Chestermere and Okotoks getting involved by driving or donating goods.

Okotoks resident Dee Patterson, who attended the June 26 event, saw the effect of the flooding first hand when she was evacuated from her home when the Sheep River flooded on June 21.

“I had 15 minutes to get out,” she said. “It was the most terrifying thing. That’s why I am here. It’s the most horrible thing to be displaced.”

Monica Neitzert joined the efforts from her Calgary home after learning about it via Facebook.

“I wanted to help out and do what I can do,” she said, adding she has a friend who lost everything in the High River flood.

“I am pleased to see a good turnout. It is good to see to see lots of donations.”

Pamela Grant of Airdrie was amazed at the generosity of her fellow citizens.

She said while filling a cart in a local grocery store for those in need, she met others doing the same.

“There are tons of people here to help,” she said.

Artur Pawlowski, who works with a street church ministry in Calgary, came out to lend a hand after he spent the evening of June 25 – until midnight – feeding displaced residents at the Siksika Nation.

He brought 400 loaves of bread, salads and more to Airdrie for the flood victims.

“It’s a perfect opportunity to let people know there is hope in the midst of tragedy,” he said. “It’s amazing to see how people come together.”

Brown, who has visited several flood-affected communities including High River, Cochrane and Calgary, said it will take a while for communities to get back on their feet.

“High River is devastated,” he said, adding the City of Airdrie is lending a hand where it can while awaiting word of specific needs.

Brown encourages residents who want to donate to do so through the Red Cross, noting potential volunteers can find up to date opportunities on the City’s website at www.airdrie.ca.

He said he isn’t surprised at the outpouring of donations and volunteers.

“We are all family and when our neighbours are hurting (we help),” he said.

“If it had been in reverse, we know they would be there. It’s just the right thing to do.”

Brown said Airdronians helped by obeying the outdoor water ban to help ease stresses on Calgary’s water treatment plants, from which the city gets its water.

He added during the ban, which was lifted June 30, the City watered its trees with stormwater from East Lake.

Blake Richards said it’s important all three levels of government come together to aid flood victims and clean up.

“There is going to be a lot of hard work to do,” he said, adding the federal government is working on monetary measures to help rebuild.

“We’ve been through (hard things) before. We always pull through because we come together.”

Harper, whose clothes were dirty from her earlier basement-cleaning efforts in Calgary, went with the convoy to Morley, where the goods were to be dropped off.

She said she expected to see people who weren’t getting as much help as those in the city, adding rural folks tend to pull together in times of crisis.

Harper said the impact of the floods has been huge but so has the outpouring of volunteers.

“People are devastated, some have lost everything,” she said. “They are grateful (for the help) but upset and tired. That’s the tale of these neighbourhoods: roaming groups of volunteers.”