Well known advocate for the poor and the homeless. Canadian clergyman and civil & human rights activist.

Artur Pawlowski is a Canadian who was born in Poland on March 28, 1973 in a city called Kożuchów. He grew up under a Communist regime seeing soldiers with machine guns and tanks on the streets as people rose up in 1981 to fight for their freedoms. Soon after, he watched the end of communism in Poland. Artur attended one of the best high schools in Poland under the patronage of UNESCO. During this time, he started to travel around Europe became a very successful smuggler. He profited in everything from alcohol smuggled from Hungry to electronics bought in Vienna and gold funnelled in from Russia. Artur became a small but very profitable private lender where he lent money with high interest and exchanged foreign currency. Shortly after at the age of 17, he immigrated to Greece to join his father along with his mother and younger brother. One year later, he started a construction business working for some of the richest people in the country. As a business man, he dealt with many influential and famous people. It is a business realm that he describes as “dirty, corrupted and unmerciful.”

In 1995, he immigrated to Canada. In his first two years in Calgary, he went through depression which included suicidal moods, and heavy drinking. Eventually, he lost all of his money. In 1997, he married a Polish woman named Marzena whom he had met in Greece. It was Marzena that got him back on his feet, and introduced him to Christianity. In 1998, filled with optimism, he went back into the business world. He became involved in many different businesses such as organizing lotteries, shipping and distributing goods, building and development and owned and operated a high end magazine in Calgary called Calgary Living. Within a year, he was back in the business world full steam. With over 30 people working full time, 50 job sites and many contractors, he felt he was back in the game.

In 2000, his first son Nathaniel was still born with a smashed lung and his heart on the opposite side. Through the doctors’ efforts the child was revived, but the diagnoses was that his son would not survive. When was asked by the doctors about the possibility of unplugging Nathaniel from life support, Artur and his wife refused. The surgeon opened his tiny body in an effort to save him, but his lungs were deemed irreparable and his heart inoperable. Artur and his wife did what they could: pray. For the first time in his life, he dropped to his knees. He pleaded with God to heal his son. A few days later, through supernatural intervention, their prayers were answered. The boy defied all odds and was totally healed. This incident was best told by the doctors themselves. After the symposium of doctors he was told that “Your son should not live but he is alive. He should not breathe, but he is breathing. We called your son ‘star baby’ because he was like a baby that came to us from the stars.” These incidents changed Artur, and lead him to make a commitment to stop living just for himself and start living for God.

From that time, he began charity work with the homeless on the streets of Calgary while continuing with his businesses. In 2005 when the crisis of homelessness reached its climax and headlines were saying “Homeless Lost Hope,” “Homelessness on the Rise,” “Tent Cities Emerging in Calgary,” and “People Dying Under Bridges,” Artur decided to walk away from his business realm and to never return. Through this decision he lost millions of dollars and put himself into the fight for every human being that was falling through the cracks. Within a few years, he went from a small unknown ministry to an organization that was operating from seven locations in Calgary, producing a T.V show that broadcasts to 120 million satellite dishes, distributing hundreds of thousands of meals per year, and starting similar ministries in several different countries. He became instrumental in reinstating the March for Jesus in different countries including Canada. Through the years he managed to form a number of policies that were implemented by the government to improve the lives of the poor in Canada. His advocacy work was recognized many times by the media such as The National Post, who called him the “symbol of free speech.” As well, there were documentaries broadcast in Poland about his work as a “Street Advocate.”

In 2005, Artur started to expose the corruption in homeless shelters. He openly spoke about the abuse of power that was taking place inside those organizations. He spoke up about rapes, the stealing of personal belongings by staff, violence, the barring individuals that would not consent to sexual favours, and drug trafficking inside the facilities by staff, etc. At the same time, he also started an organization later on known as “Street Church Ministries” which took the gospel into the middle of the worst places for drugs and prostitution in the city of Calgary in an area known as “Needle Park”. Because of his public speech, he life was endangered a number of times. Thugs hired assassins to eliminate Artur’s voice for interfering with their businesses. Throughout his continued advocacy work, he has received many more of these types of threats. However, despite the opposition from the criminal world the ministry thrives.

Within a short period of time Street Church volunteers were successful in assisting hundreds of drug addicts and alcoholics in leaving the lifestyle of drugs and violence because of that simple message of the gospel. In the process, he manages to save millions of tax payers’ dollars. His message is very straight forward, “You cannot do it on your own. You do not have the strength or power to do it. You have tried many times, but have failed. Now it’s time to turn to God, Jesus, and let Him do it. He has the power to turn your life around. Your tomorrow does not have to be like today. With Jesus, all things are possible. He is the hope that you are looking for. So, it is time to repent. Live, do not die. There is hope, his name is Jesus.”

During one of his sermons, Artur was approached by two homosexuals with a declaration, “We hate you. We hate this church and this cross, and we will do everything in our power to shut you down.” He refused to quit and persisted in preaching all biblical truths and exposing corruption in the shelters. Because of this, he quickly made more enemies including politicians who stepped into the scene to try to shut the ministry down. And even though Street Church Ministries was positively recognized by the media with headlines such as “Street Church brings hope to the homeless” etc., the enemies became very determined to destroy the work of the ministry. From that moment police, bylaw officers and politicians started an open campaign to remove Artur and the church from the public square.

For his public preaching and ministering, he has faced constant harassment and persecution. He was first arrested for publicly reading from the Bible in a Calgary park in 2006, and since then has been arrested or had to turn himself in to the authorities nine times. Street Church Ministries has received over 150 tickets and summons relating to the work of feeding and caring for the homeless with fines ranging from 36 to 10 000 dollars. Through years for defending the rights of Canadians, he has spent hundreds of thousands of his own money, and has remortgaged his home five times. The ministry has received fines for illegal public gatherings, the giving away of free goods and services, illegal prayer, placement of material such as tables and food on the ground, preaching, making someone uncomfortable, and having illegal signage such as “Jesus is King” etc. In the face of these trials, Artur has taken the opportunity to testify before lawyers, judges, politicians and citizens about the greatness of the Living God. The stories of persecution and arrests were covered many times by international media outlets giving him opportunity to preach the gospel across the world.

In addition to the focus on the streets of Calgary, Street Church has been involved in other activities that proclaim the Gospel. In 2012, to protest this ongoing harassment and discrimination Street Church Ministries led the Calgary Centennial Stampede Parade, lifting the name of Jesus in front of half a million people. As well, for years, the ministry has been involved in Kenya by providing humanitarian aid such as food and medical supplies for orphans and starting churches.

For his commitment to his faith and beliefs, Artur has been recognized by various groups. In 2012, for his support of Israel, he received the Honorary Chaplain Position for the Province of Alberta from the prestigious Israeli humanitarian organization The Magen David Adom. He is the first ever to hold such a position for the province of Alberta. As well, on April 28, 2012 he received the ‘Free Speech Award’ for his seven years of ongoing defence of Canadian constitutional rights and freedoms. This award came from the organization called (PGIB) The Progressive Group for Independent Business of which Canadian Prime Minister Stephen Harper is a member. Through the years he has had multiple opportunities to meet with the head of States and high ranking politicians sharing with them the righteousness of God and the gospel of Jesus Christ.

Artur Pawlowski currently lives in Calgary, Alberta Canada with his wife Marzena and their three children; Nathaniel, Gabriel, Maya- Grace. He continues his work on the streets with Street Church Ministries and is currently facing four trials for his stand in defending human rights.

For his commitment to his faith and beliefs, Artur has been recognized by various groups. In 2012, for his support of Israel, he received the Honorary Chaplain Position for the Province of Alberta from the prestigious Israeli humanitarian organization Christian Friends of Magen David Adom (CFMDA). He is the first ever to hold such a position for the province of Alberta.

As well, on April 28, 2012 he received the ‘Free Speech Award’ for his seven years of ongoing defence of Canadian constitutional rights and freedoms. This award came from the organization called (PGIB) The Progressive Group for Independent Business of which Canadian Prime Minister Stephen Harper is a member. 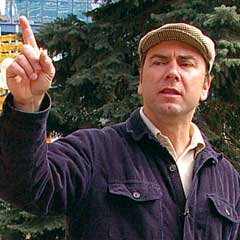