Jason Kenney’s ‘statement is completely false and, in fact, misinformation,’ Nathaniel Pawlowski said in response to Kenney’s justification for why Nathaniel’s father has been locked up for more than a month.

CALGARY, Alberta (LifeSiteNews) – The son of Canadian Christian Pastor Artur Pawlowski alleged that Alberta Premier Jason Kenney is lying about the reasons his dad is still behind bars.

“The double standard and hypocrisy is clear as day. Artur is right now being presumed guilty, so we no longer have the presumption of innocence in Alberta. Thanks to Jason Kenney,”  said Pawlowski’s son Nathaniel while speaking at a prayer vigil at the Calgary Remand Centre where his father is being held, as reported by Rebel News.

“Furthermore, Pastor Artur does not have fair access to counsel, the prison has denied visitations and has repeatedly denied the lawyer’s phone calls to their client,” he continued.

Nathaniel then noted that his dad “does not have the same legal rights as everybody else.”

“Under Kenney’s regime, Artur has been placed in the worst conditions possible in Canada, a seemingly free and democratic society. A pastor who has not stood trial or been found guilty is still in solitary confinement,” Nathaniel said.

Nathaniel’s comments came in response to a Kenney press conference on Sunday at a Calgary church that was vandalized to announce additional funding to protect places of worship from hate crimes.

At the press conference was a Rebel News reporter, who told Kenney directly that many Albertans are concerned about religious freedom, and some felt they are not being protected given the fact that Pawlowski is still in jail.

Kenney responded by claiming that while Pawlowski has the same rights as anyone before the courts, he would “suggest that going to a very tense, combustible situation and inciting people to be willing to die and commit acts of violence for their cause is very likely to have legal consequences.”

In February, Pawlowski traveled to the Alberta-U.S. border in Coutts, and gave a sermon to truckers blockading the highway, telling them peacefully to “hold the line.”

Kenney claimed that as he understands it, Pawlowski has been detained “by the police because of multiple breaches of terms of release court orders, as well as an incitement to an alleged incitement to violence at the Coutts Border Crossing blockade.”

Nathaniel blasted Kenney’s statement regarding his father as “lies.”

“This statement is completely false and, in fact, misinformation. Actually, Artur is detained and charged with mischief over $5,000, aiding and abetting the blocking of critical infrastructure under the Critical Defense Critical Infrastructure Defense Act, and allegedly breaching a bail condition for quote, ‘not keeping the peace,’” Nathaniel said.

“He’s not detained for multiple breaches and our court orders. He’s being charged for exercising his free speech, free speech and vocally opposing your tyranny.”

Regarding the incitement to violence claim, Nathaniel addressed this by saying, “Jason Kenney, I have a question. I’m not being facetious or humorous. I really need to know. Are you a moron? Seriously, I have to know if I’m dealing with an intellectually handicapped individual.”

“You realize that speech is published and available to the public, for which you claim that he incited violence.”

Last month, a provincial judge denied Pawlowski bail, claiming he was a threat to “public safety” because he refuses to comply with COVID health rules.

As a result, Pawlowski is still behind bars at the Calgary Remand Centre, where he will stay until a hearing takes place.

Pawlowski was arrested for the fifth time on February 8 by an undercover SWAT team just before he was slated to speak at a peaceful protest at the Alberta-U.S. border near Coutts.

The police had been staking out the Christian preacher’s home, according to Nathaniel.

Nathaniel then noted that his father said to the truckers repeatedly that the protest should stay peaceful and without any violence or use of “guns and swords.”

“What kind of brainless individual can interpret that as incitement to violence,” Nathaniel noted.

Nathaniel then said that claims by Kenney his father has the same rights and due process under the courts are a lie, considering he has been behind bars for over a month without access to a judge.

“You arrested him and several other pastors in Alberta for keeping their church open while you drank whiskey at Sky Palace with your buddies free of legal consequences. Liquor stores, marijuana shops and Walmarts were allowed to operate, but church was deemed illegal and unessential by you,” Nathaniel said.

Pawlowski’s supporters have been holding daily prayer vigils in support of the preacher outside the Calgary jail, where he is being held, demanding his immediate release. They have said they will gather outside every day until he is released.

Pawlowski responds from jail regarding Kenney’s comments, calling them ‘shocking’ but not ‘surprising’

The Rebel News report included a short interview with Pawlowski himself, who spoke from his jail cell regarding Kenney’s comments.

“Obviously, in the province of Alberta, there are two laws one for them and another one for the rest of us,” Pawlowski said regarding Kenney’s comments.

“The level of hatred that I receive as a clergyman from Jason Kenney is shocking, not surprising, but shocking.”

Pawlowski added that “right now, he is talking about protecting the freedoms, the freedom of religion, while at the same time he has jailed, imprisoned pastors.”

Besides Pawlowski, two other Alberta pastors were arrested last year for going against COVID rules, which limited church attendance size.

Calgary Pastor Tim Stephens was arrested on June 15, 2021, and was hauled away by police with his weeping children looking on, all because he held an outdoor church service contrary to COVID rules.

Another Alberta Pastor James Coates of Grace Life Church spent 35 days in jail in 2021 for defying COVID-19 rules because he would not sign a bail agreement to stop leading his church.

His church was forced shut down and barricaded by government officials for months.

Pawlowski and his brother, Dawid, made international headlines after they were arrested in a highway takedown in May 2021 for holding worship services contrary to Alberta’s COVID rules affecting church service capacity limits.

Both spent a total of three nights in solitary confinement.

Kenney lifted a province-wide mask mandate at the start of March after earlier ditching the COVID vaccine passport amid the trucker Freedom Convoy and border protests in Alberta. 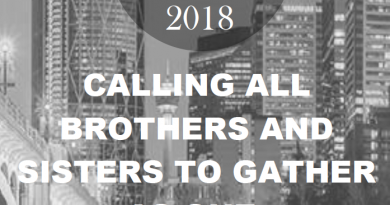 The Time Is Now – 2018 “Conference, Rally, The March for Freedom and Live Concert with Beckah Shae!” 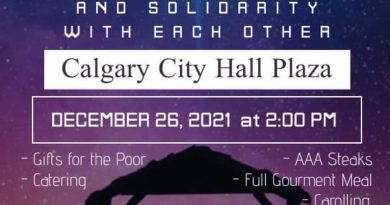 Christmas Celebration! Festival of Love and Solidarity with Each-Other