Jesus is still gracious to us. We didn’t write to you for some time because we were so busy with Christmas festivals and launching our radio talk show (in the next newsletter we will explain this in greater detail).

We had a few thousand people show up to our festivals this year. They were cold and hungry and they were so pleased that we were there for them. By the way, in the past few weeks, every time we go (four times a week), we hear the same response. You are crazy to show up in these extremely cold temperatures. Or people would say, you really must love your God if you choose to show up. Thank you, thank you, with tears in their eyes. People are just so outwardly grateful for the help. That reminds me of a scripture – when people will see your good deeds they will glorify your Father in heaven.

The AAA steaks were awesome. In addition, we served thousands of smokies, hot dogs, turkey, and every person that came left satisfied with a full belly and the message of salvation. Praise God even socks were available for every person, over a thousand pairs in total. Toques, blankets, gloves and warm clothes were given to many. To take care of the poor, gives us a true joy as we see them coming and being blessed by our Lord Jesus Christ through the hands of the volunteers. I don’t think that there is a greater joy that can fill your heart, when you see their needs met, excepting salvation. When I look at those people in the line ups, filling their plates with all the goodies that God provided for them, I really do think that we have the very best job that a person can have. The treasures on earth will disappear but those in heaven are eternal. We know that this is not simply giving perishable gifts but also the true gift of eternity.

We had Jo from High River playing the guitar, and about eight people worshiping and singing Christmas carols. It was a very joyous time that touched the very inner parts of your heart. It was as though God anointed their playing and singing. Everybody was blessed. What is amazing is that every time that a volunteer would choose to quit the ministry, God always replaces them, with another warrior, so although they are missed, we still have what we need to operate.

Even though it was so cold, there was a true atmosphere of Christmas. City Hall decorated with Jesus’ flags (Jesus Loves You, and Jesus is Lord), the cross, the big flag Jesus, the only way to heaven, barbecues, tables, and truck loads of goodies. If you could only see this for yourself, you would want to be a part of what went on. People prayed for, the gospel preached, Jesus’ name lifted high. The ten commandments were posted for all to see and above it Jesus is King for thousands to see in their cars and on the C-Train. City Hall transformed into a celebration for the Living God.

City officials loved it as well. We ended up with three tickets, but they were all worth it. Every alderman and our mayor were all invited, but none came. Maybe the festival was too far from their offices. Perhaps we should have the next festival inside City Hall. Perhaps they will come then. It just shows you how much we need to pray for them, because you know how God punishes those that oppress the poor and have no regard for the downtrodden. But, we love them and Jesus loves them.

Andrew, a young guy, that was involved with really bad company, went back home saying to us that he is staying strong with Jesus. Praise God. That’s what we like to hear. We don’t want to keep people with us, but rather send them to be a living testimony of this wonderful Living God.

In the past month, we had a few stories like this one. Isn’t God good?

We see more and more homeless people that are either off the streets or really touched by God, helping us out.

University students visited us under the bridge, bringing their drums guitars and we had a concert. What was amazing about this is that as they were playing and singing, many homeless surrounded them in a circle. David started to dance all over the place, the homeless and drunkards and drug abusers were so touched by this. It’s like the Spirit of the Living God came down. Some of them started to cry, and one came in the middle of the circle crying, “how can I escape hell?” There was a lot of prayer that night.

There is an amazing incident that I want to share with you. For the past month, we didn’t see many drug dealers under the bridge. Let me tell you what happened. There was a young drug dealer who came to the ministry. He would mock God, shout profanities and do his dealings right in our midst. It was a very disturbing scenario. I prayed, “God, save him or remove him, it is not right that he mock you like this, in front of everybody.” One day he returned and God gave me a word for him, that his days were numbered, he was really listening and we sat together and I told him that I don’t know what that means but God told me that his time is up. I said to him that I don’t really know what that means for him, but I shared the gospel, I told him to make it right with God, then he left.

A few days later he returned again and dealt drugs right next to me as I preached in an effort to prove that he was not afraid of God. Later that day he was in the line up to receive some food (drug dealers deal drugs with a promises of riches, but here he was with his hand out, in complete lack) and I, being prompted by God, pointed to him a told him, “You are dead and you just don’t know it yet.” This was a total word from God, because I didn’t really feel any particular feelings toward him, it came right out of my spirit. This caused a frenzie and he and his friends came threatening, standing next to me. The young drug dealer took his food and threw it at me. His friends surrounded me, with their hands in their “pockets” likely grabbing hidded weapons, ready to strike. God once again protected all of us from the hands of the wicked, and since that day they have never returned.

This just proves that God looks after His own.

There were some homeless that were living under the bridge that came to us indicating that we were in their bedroom and, “who gave you the right to be in our bedroom?” One of them came to me telling me that he had a pistol and that if we did not leave them alone then he would “pipe” me. The homeless came to me confirming that he did in fact have a hand gun and that he was, in fact, planning on taking me out. This was a very threatening moment, but in this ministry you cannot allow fear to take over. I again prayed, “God either save them or remove them.” Not long after this we came and the whole place under the bridge was clear of every “bedroom item”, and there was no sign of the residents. I later found out that what had happened is that the media had come to take some shots of these under the bridge dwellers, and in the process drug dealers were exposed to the public eye, in the background of the pictures that were printed in the paper. Furious at the homeless for exposing them, the dealers came and told them to take off or they would “pipe” them. God works in mysterious ways and every life is in the palm of His hands.

One day when we went under the bridge from afar we saw four men struggling with each other. It looked like they were fighting. Three people were beating up the fourth. Without thinking much, we ran like bullets to take them apart. What really was happening was that three people were murdering the fourth one. A man got stabbed in the back. The knife with blood all over it, was removed by Moris and I with Louis and, I think it was, David grabbed the people and removed them from that man laying on the ground. Later on the ambulance took the stabbed man and I was thinking that if we were not there, would he be alive today? Those questions always run through my head, and then another one comes, “How many are not around us anymore and are in hell, because God’s people chose to go the other way?”

There also was a break through with some police officers, which especially gives us a lot of joy, as we always respected their efforts in fighting crime. Very often, right now, they stop where we are ministering just to ask if we need anything or how we are doing or just to shake our hands. On Monday, one of the police officers told us that he really appreciates our work and that the only thing that he hears from others is how the work that we are doing is good.

One more story to end off. Sunday, there was a protest at the steps of City Hall at the very time that our Street Church service was on. Today, the same group came to demonstrate. One Sunday there was around fifty or so and today there was over three hundred people, Muslims, having a demonstration about the conflict in the Gaza strip, between the Palistinians and the Israelites. The timing was perfectly orchestrated by God. Not only were we able to preach to all of them for about one and a half hours straight, but the media showed up, police showed up, and all heard the message that the only true peace for mankind is through the Prince of Peace. After the demonstration, Muslims came with their children and received gifts and candies, and other more fundamentalist Muslims came and we were able to share with them one on one about this Prince of Peace, the only way to heaven. What’s more amazing about this is that some of them told us to keep up the good work! Wow. Strange that we are sometimes bashed by believers yet lifted up by unbelievers. Who can know the mind of God? I am telling you, at the end of the day, on the last day of the year, I would not have wanted to be anywhere else. What an opportunity we would have missed to share the love of God with about five hundred people today.

May the new year be even more fruitful for all of us, in the name of Jesus Christ of Nazareth, and may the Lord bless you and keep you and make His face to shine upon you and give you rest. We want to thank you for all your help and your prayers. 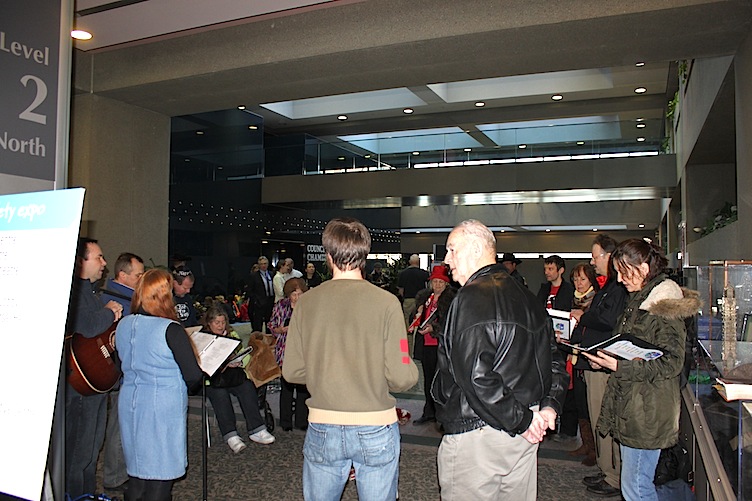 So called peaceful rally for Palestinians.