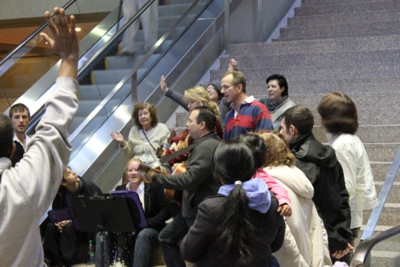 Jesus was controversial, the apostles were bold, the prophets were strong and courageous, and today, at City Hall we walked in their footsteps. Many in the church today, cannot imagine a church service in the atrium of a municipal building. They cannot fathom the bold preaching of the Word of God from the very seat of government as though speaking with authority from on high. History teaches us that only those who are willing to take God seriously, and forward His Kingdom, will enter into His promises. Our God is the God of the Impossible. With Him, all things ARE possible.

Due to a recent invitation from the mayor we decided to take him up on his offer and conducted a church service in the Atrium at Calgary’s City Hall today. We read about the cloud of witnesses from the past, Gideons, Esthers, Davids, apostles and what they all achieved by being firm in their faith. You see, you cannot please God without faith. We had amazing worship; guitars, a bongo drummer, and many voices. In the words of one listener that works at City Hall, "the worship sounded so amazing with all the voices 🙂 ".

Brother Koshi, from India, reminded us that the Bible in Canada’s history is the very reason why all the immigrants want to come to Canada, even if they don’t want Christianity. He explained that he has been all over the world and that he has seen that the countries that have a strong Christian influence are the Countries that immigrants want to go. Why? Because in those nations, people aren’t forced to believe what Christians believe, but rather immigrants are free to choose for themselves, whom they will serve.

People came to hear the worship and the preaching. Some were fellow Christians who were cheering us on, some were stirred, some were perhaps not happy that we were there and most people that went by were interested, were smiling and seemed to be warmed, in their hearts, by the music and praise. We even saw people who were looking on from the balconies, listening and enjoying the service. Let’s be honest, there will always be some that will like it and others who will not. The point is, God calls us to them all, with a message of love, mercy, forgiveness and what’s most important is the message of hope and salvation which only God can give.

I also took the opportunity to share about William Wilberforce, who was a British politician in the 1800s, who was not ashamed to boldly proclaim his faith in Jesus Christ in parliament. He also was not ashamed to take the very controversial and unpopular stance that slavery should be abolished. He fought for his whole life to finally, with only three days left before he died, see his mission beginning to be fulfilled, the first laws were put in place to start the dismantling of slavery in Britain. William Wilberforce is an example to us who would be willing to do great things for God, never giving up, always believing that all things are possible with Christ Jesus.

Jim Blake, the Chairman of Concerned Christians Canada, then stood up and closed the service in prayer, praying for the leaders of our city, our province and our nation. He prayed for the financial affairs of the city that all matters would be conducted with honesty. He prayed for the citizens of our nation, that God would convict everyone of sin and encourage them to repent and turn to righteousness and to Jesus. He even prayed that God would forgive those who oppose His Word and His people, citing the example of Stephen when he was stoned for the sake of the gospel.

This truly was a beautiful breakthrough for the Kingdom of God and a beautiful time in the Lord for all who came. We look forward to our next service at City Hall with great anticipation. 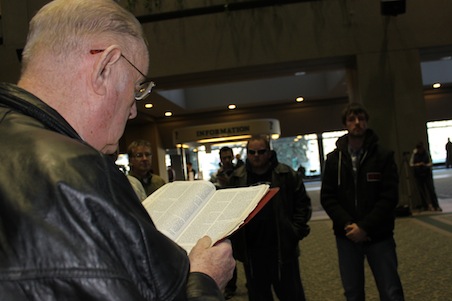