Monty had been bugging me to come to the mountains with him for a couple of days already.

Being so busy with work and street church, I had canceled on another friend going to Banf for the July 1st weekend.

Wanting only a day trip, the night before July 1st I accepted Monty’s invitation.

Monty’s known Van was at my back door at a bright seven thirty, gas, and we where on our way.

Now on route, the plan was; its for us, no preaching, no charitable donations, no work, no nothing just Monty, me bbq food and some relaxation time in the mountains.

On the way out my heart was sinking and I was struggling to find what was wrong with in me. My thoughts went towards my family, “Was there something wrong” I thought to my self, “My mom? My brothers?” I felt redness, all around me.

At about 8:30 am while traveling West down the #1 Canada highway we spotted a suv in the ditch, unusually parked with a large Canadian flag tied to the tale gate flying in the wind.

As we passed I noticed a man lying on the ground on a section of weeds and grass that was mowed in the ditchs north side. On the right hand side of the high way going west.

The man, on his back, hands over his face, was lying adjacent to a hart shaped rock formation that looked pink. In the middle of the rock formation was a bunch of flowers and a memorial angle made of stone.

My pal and I discussed our promise not to do any thing out of the ordinary cause we were prayed out, worked out, and needed to be on our own time at least one day that holiday.

We kept on traveling, but that feeling was powerful and I could not help but fight Monty on this one, “Go back”, turn around”, I said with authority, Monty retorted “NO! We are going to the mountains”.

At that exclamation, the Van Service engine light popped brightly on, and the Van started to shake and fight as if to be loosing air.

Monty and I looked at each other, and Monty said, “We aren’t going to make it to the mountains now, we’ll go back”.

We found a turn around point in the grassy meridian of the Trans Canada High. We began back around to the east, about 8 kilometers down the high way from the man, the suv, and the memorial marker.

Our awareness began to heighten. Both sets of our eyes grew as we searched closely as not to pass the spot where the suv sat on the other side of the highway.

We searched for about 6 minutes and there it was pink land markers, on a stream under pass, pink stones and the black suv.

We still where heading down the oposit side of the highway and couldn’t get across the meridian, tall grass and a steep ditch traced every where dividing directions of the road.

Searching for a level spot that we could turn around in, to make our way back to the heart wrenching sceen, Monty, cowboy said “I don’t know where we are going to turn around at.” “We can’t make it”, I bocked, as he turned the nose of the fan down into the grassy ditch dividing the Trans Canada High way East and West!

The van rolled out of the ditch, as a transport, and numerous cars, flew buy.

Monty navigated the van like a chap and we crept across the high way to the spot we gunned for.

Coming up to the suv I became very humble and felt a sadness in me I don’t feel all to often.

Becoming shy, if not just concerned for my approach, Monty urged me on, saying, “this is a good time to talk one on one”, “Go talk to him.”

As the Van came to a stop, the Black Suv with a deep nose angle into the ditch, flag flying looked un damaged.

I got out of our vehicle spotting the man again still lying in the mowed grass next to the memorial.

I started with the words to the effect of ,“ Is every thing OK brother?

The man looked at me and with very little said to one another, “He exclaimed God sent you to me”.

He was very distraught, tracks of tears under both his eyes.

With out thinking I replied, “Yes, he did:”

I greeted the man again, introducing my self, softly as I could and expecting a bark from the man at any time to leave him alone.

“I am John, this is where my daughter is”, talking to me in an out of this world state.

My heart went through a half dozen memorials in my past, visions, in an instant.

I told him I know how he feels, even known I can’t really grasp the pain of loosing a beloved child.

We talked, Mr. John open to preyr I spook what the Holy spirit told me to, telling John of the great life he has and that God loves his daughter and his life must go on.

We cried together, two good sized men! He was very friendly to me though.

In helping John stand we embraced and hugged one another. John told me about the memorial, that was in total a sadly cute heart shaped rock formation painted pink, complete with flowers, a large teddy bear and a 2′ high female stone angle also highlighted with pink. It was a memorial he placed for his daughter.

Visions rolling into my minds eye, this fair skinned girl pretty with auburn, shoulder length hair. Then John’s streaming tears lessoned as he describe how beautiful his daughter was, before she was hit by the motorist last July 1st, how beautiful the red in her hair was and making a motion with his hand as if to touch it.

We spook, and I asked to prey for John, “Father, I bring my brother to you today with great weight on his shoulders, a pain of the loss of his daughter, please take the pain away father, in Jesus name”

“Give him the sight to see a great future for him self, as he remembers his beautiful girl. Let him help others so they may be spared the pain, and be there when some one is in distress since youths these days have little direction in the world! Father let John know how much you love him, and know that there is a chance for him to see his beloved girl again, and how much you love her, in Jesus name I prey”

Finishing John urged me to walk with him down the high way. We walked and talked he telling me that he had been there for hours, and how much this child meant to him. How this memorial is a symbol of people not paying attention.

We walked to a girder in the road 20 meters from where I had approached the man. One of the wood posts of the low highway side barrier was rapped in a pink ribbon and painted pink. John showed me a deathly familiar sight of pink paint on the highway.

The paint, he had thrown out across one lane was like a blood pattern, “That is where they found her, that represents her blood”, he told me.

My thoughts went with the heart feelings of her and his loss, to my best friend who died the same way in 2003.

I had not felt the same pain about that, I think I berried it and it was coming out again, I just failed to recognize in my self as I tried to be a man. That was a very emotional moment to me very strong pain I felt with that man.

We spook, and John started crying very hard as we sat on the road side barrier together.

I was wondering if I made a mistake, so I apologized for coming. “I am sorry to bug you” I said sorrowfully, I was concerned in the thought that I might have provoked pain in him.

John looked me in the face tears streaming again, and said, “I am crying because I am so happy”, I am relieved!”

He confided in me that when we came, he was trying to work up the strength to walk in to traffic to relieve his pain, and commit suicide.

With amazement I began again, talking with words inspired by Jesus? I again told John about the great life he has to lead, how god loves him, and how he must embrace this horrible tragedy with faith! Use the memory of your daughter, go and help others in the world.

“Do something that would make her happy. She would not want pain!”

John is a Canadian Native person, we chatted briefly about the abandonment of Canadian Native youths and the unfortunate results of drugs and alcohol on all youth in Canada. Alcohol played apart in the death of his girl as he said she was drinking. Drugs also were found to be apart of Morrises death when he died the same way in 2003.

We wrapped up our time together I felt questions, deep in me, a spirit of goodness as well! I was in amazement, as something was going to get done and Monty and I were the ones bring it.

Monty finely at the end walked up respectfully and joined us, bringing a flashy red “Jesus is lord flag” and saying “This is a souvenir” to john, we told him Jesus loves him, which he does, and left a good man on the high way staring at his new found faith and flag on that bright, July first mourning.

We got in the van and monty and I both white in the face looked at one another, in weird astonishment.

Continuing our journey we spent the day with no engine light sign, no problems once so ever through a 400 km trip through the mountains.

We ended up preaching the gospel and bbquing in the pouring rain in one of our great Canadian mountainous parks, with many happy people from California, a soaked family from Vietnam and some miscellaneous Canadian travelers. It was a great day even known we lost 30 minutes by force!

Thank you for the great lesson my great God! 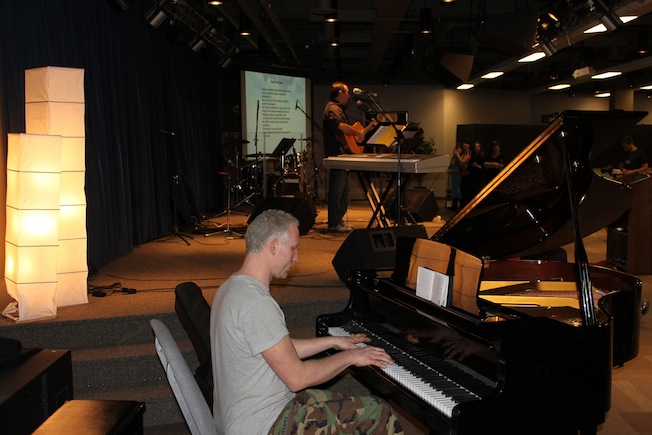 What an amazing weekend we had! 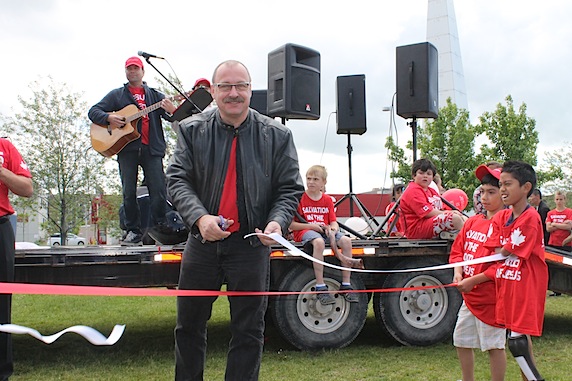 For such a time as this! 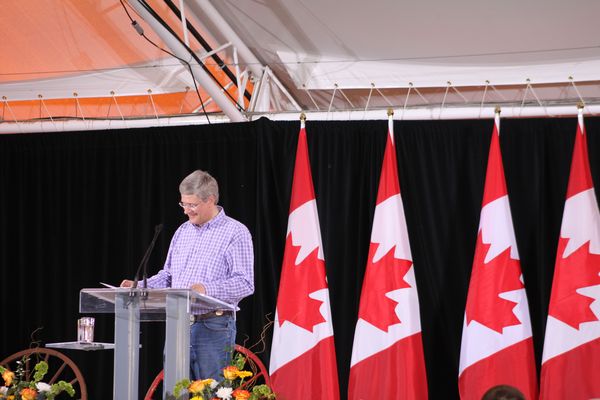 We had an awesome time at the Prime Minister’s barbeque.