The March for Jesus is a time for Christians from various backgrounds and ethnic origins to come together and celebrate their mutual and common love for Jesus Christ to the glory of the Father.

Some have asked, "Why a march?" Others have said, "Why not keep it in the churches? Can’t we just celebrate our faith behind closed doors?" To those questions we answer, "Jesus said, ‘go out into the highways and byways and compel them to come.’ He also said, ‘Go and preach the gospel to all creation’. And ‘If you confess Me before man, I will confess you before My Father in heaven, but if you will not confess Me before man, then I will not confess you before My Father.’"

So the March for Jesus is about public confession of our faith in Christ, it is a public invitation to all who would come to get to know the lover of their soul, the one who knit them together in their mother’s womb, and the one who can save them from their sins. The March for Jesus also has spiritual power as a public proclamation that Jesus Christ is the King of kings and Lord of lords, and is a spiritual trumpet call to alert the principalities and powers of this age that Jesus will one day rule and reign and place all under His direct authority and dominion.

The March for Jesus is also a unifying act, bringing together the greater body of Christ in one Spirit and one accord, setting aside denominational, ethnic, economic and other differences, to stand with one voice and praise the True and Living God for all that He has done, is doing and will do.

In 2010, the March for Jesus was brought back to Canada in Calgary, Alberta, Canada after ten years of absence. Both last year and this year the march was a huge success with thousands attending, praising, worshiping and praying to the Father in the name of Jesus Christ His Son. There were many victories in the natural and in the spiritual. Public testimonies and public confessions were made. Free food, caps, balloons, t-shirts, ice cream and clothes were given away at the event.

The Marsz for Jezusa in Poland will take the experience and that was gained in putting on the March for Jesus in Calgary and create the experience of a lifetime on the streets of Warsaw. We are all looking forward to many testimonies of the great work of the Holy Spirit in 2012. 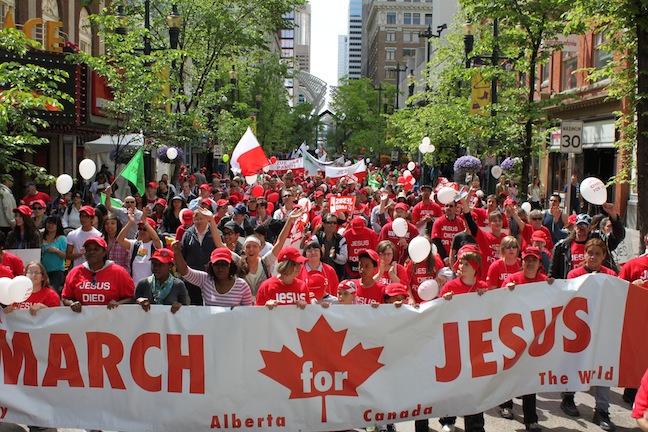