We noticed lately an increase of people that are being healed at Street Church. Definitely Jesus is confirming more and more than His will is unchangeable. He loves people with His everlasting love. He wants to heal them and save them.

Jesus’ miracles of healing gave validity to His ministry. He was a physician, a healer whose time was consumed with encounters involving people who were sick, blind, lame, deaf, leprous, paralyzed, or mentally ill. Jesus’ healings were also used to support His claim to the promised Messiah. When John the Baptist was in prison, he sent two of his disciples to ask Jesus whether He was “the one who was to come.” Jesus responded: “Go back and report to John what you have seen and heard: The blind receive sight, the lame walk, those who have leprosy are cured, the deaf hear, the dead are raised, and the good news is preached to the poor” (Luke 7:18-23).

“And, behold, there came a leper and worshipped him, saying Lord, if thou wilt, thou canst make me clean. And Jesus put forth his hand, and touched him, saying, I will; be thou clean. And immediately his leprosy was cleansed.” Matthew 8:2,3

Laura came to Street Church tonight with her long-time boyfriend who was pushing her in a wheelchair. She had back surgery in November for an infection and they removed bone in her spine. I prayed for her back in the name of Jesus and she was completely healed! She had no pain, and could touch her toes with no problem at all. They came back later in the night and were full of joy and told me they were changing their lives because of what had happened and because of what I had told them about this Jesus who healed her. They also (amazingly) found a Bible on a ledge somewhere after they first left and after I had told them to seek this God!

She asked me at least twice while she was being healed what I had in my hand because she could feel something working inside… it was funny!

There are no coincidences in the Kingdom of God! She has an upcoming doctor’s appointment (MRI) on the 18th or 19th and promised to come back and give us a report, so stay tuned!

All The Glory to Jesus Christ!

“When the even was come, they brought unto him many that were possessed with devils: and he cast out the spirits with his word, and healed all that were sick: That if might be fulfilled which was spoken by the prophet Esaias, saying, Himself took our infirmities and and bare our sicknesses.” Matthew 8:16,17

Stephanie was suffering from a broken, painful knee, on crutches. I prayed for her several times until the pain was completely gone. When I first talked to her she was in pain, sad, crying. Now she is healed, optimistic, and in wonder.

Awesome! Here is a video of her afterwards:

In both of these cases the people who were healed were convicted (absolutely) of the power, love and magnificence of our mighty King Jesus, and were to begin a new path with Him. Rejoice!

(updated) During the last few weeks I posted two videos of women that were healed at Street Church. One woman had been on crutches with a broken or shattered knee, and the other was in a wheelchair after having back surgery in November where surgeons had removed bone from between her 4th and 5th vertebrae due to a serious infection in the spine. This was a major back problem, and her boyfriend was unable to work because he was caring for her full time.

I was informed that both of these women were back at Street Church today. Artur Pawlowski told me that the woman (Stephanie) healed of the broken knee came to donate some clothes and is still perfectly healed and was telling the Street Church crowd of how God had healed her. The woman who had her back healed (Laura) actually gave us her wheelchair today saying that she doesn’t need it anymore because she is healed! I really wish that I had been there to see them both again.

Our God is REAL and he does…

“Surely he hath borne our griefs, and carried our sorrows: yet we did esteem him stricken, smitten of God, and afflicted. But he was wounded for our transgressions, he was bruised for our iniquities: the chastisement of our peace was upon him; and with his stripes we are healed.” Isaiah 53:4,5

“Who His own self bare our sins in His own body on the tree, that we, being dead to sins, should live unto righteousness: by whose stripes ye were healed.” 1 Peter 2:24

Last week in Calgary, Canada, Pete Cabrera Jr prayed for Ashley over Skype. Jesus healed her of gall stones. On the next day at Street Church, Ashley asked for prayer for a hernia. 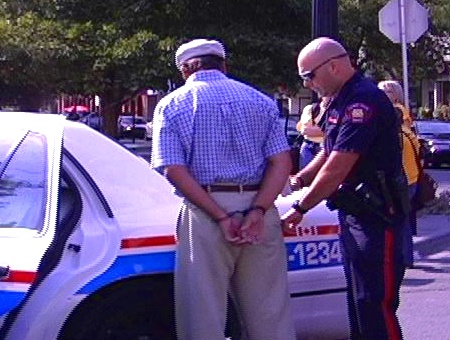 Message of Forgiveness for Disciplinary Hearing