People think were crazy for going out in such weather but think; did Jesus take a break from preaching because it was too hot or too cold? It sounds ridiculous right? But let us share with you some awesome stories from the past few weeks…

A family came to us from out of the blue, they heard about street church and they wanted to be baptised, that day the Bow river was cover with ice, but that did not discourage them, they asked to be baptised that day and they were! Is not God wonderful? They were so fired up they didn’t even feel the cold, some of the people that watched this got fired up as well and a week later we had another three baptisms. But better still, on the way home the Spirit of the living God baptised them inside their vehicles with the Holy Spirit and they began to speak with new tongues. God in an awesome way confirmed their willingness to obey His commandments.

On Sunday the 3rd in minus 30 (Salvation and prayer for homeless was going on for the whole time people were thankful for seeing us in such cold weather) we had to take turns to preach because our lips were freezing but that was just a preparation for what was coming on Monday, But we came prepared, prayed for the fire of The Holy Spirit to fire us up, all you could see was our eyes.

The thermometer had dipped to minus fifty with wind chill. The ketchup mustard and every other liquid froze like a stone. We even had a problem with our hot chocolate. For the whole day God was speaking to us that it is time to go back to Triangle Park, we prayed and we waited for confirmation which God brought through different people.

That night we saw many grateful, cold, people thanking us for being faithful. We brought socks, warm clothes, toques and blankets, but most importantly we brought the message of God’s wonderful love, manifested through Christ Jesus.

Does God show up in such weather? Is God well pleased with His peculiar and radical children?

Well hundreds heard the gospel, three were saved and many prayers were given to the different people who came. They were ripe to receive God’s promises.

But there is one story we want to share with you, around seven o’clock there came a white car that parked behind us. For over two hours he was watching us as we were ministering, preaching the gospel, serving hot food and praying for people, at the beginning we thought he was a detective. But after the service we found out his story.

The day before, he was ready to commit suicide, had already made plans, gave all his possessions away to relatives , but when he watched our program on TV, he said to himself “I need to come and talk to them, this is my last hope.” And if that was not enough, the next day, Monday, he was driving His car and he sees the red truck and he realises this is the ministry he watched the day before. He said he was desperate, without any hope, empty, depressed, without a purpose for his life, and though he was attending a church and reading the bible, having a wife and kids, he felt dead inside, he asked “if I will kill myself what will happen to me?”

Art told Him that God says you shall not murder, and that life is a gift, and no one has a right to take that gift away, and if you kill yourself you will end up in hell. So he started to cry and as tears were coming from his eyes he cried out “what should I do?” And Art told him he had to die, die to himself, die to his ambitions and plans, that he was a typical North American church goer but he needs to be born again. He said, "you have to repent from all your sins, turn away from all your wickedness, truly cry out to God, and that He would save him."

As the tears were coming down He repented from all His sins gave his life to Jesus Christ declaring that from now on he was not going to live for himself but he is going to live for Jesus, hope entered his life.

Now think about it, if we would be on the other side of the bridge and he driving on that road would not see us in that park, today would he be alive? Only God knows, but because a few faithful disciples of Christ were willing to stand up in minus 45 and preach the good news, God could use them to save lives, God is faithful to his promises.

On Friday in Triangle Park there was such a freedom, and spiritual openness, that seven people got saved and many more got prayed for. Just before we were ready to pack up Dawid had spotted a man laying on the ground, he was unconscious, in his vomit in the snow, abandoned, left to die, we were able to carry him inside to a warm place and because of the presence of the church that day, and the mercy of God, this man’s life was spared.

This location is truly a stronghold for God’s purposes in this city. By the way, before we forget, the enemy is not very pleased with what’s going on in Triangle Park, we received 5 new tickets from our faithful followers, the by-law officers.

Praise God He is true to His promises. When you obey His commandments, there are salvations and His manifestations, and persecution. Rejoice and be exceedingly glad, we are on the right track.

These are just a few of the stories for your encouragement, to write them all we would have to write a book but God knows it all and to Him be the glory. What a privilege to participate in His kingdom, knowing that everything we do in Jesus will echo in eternity. 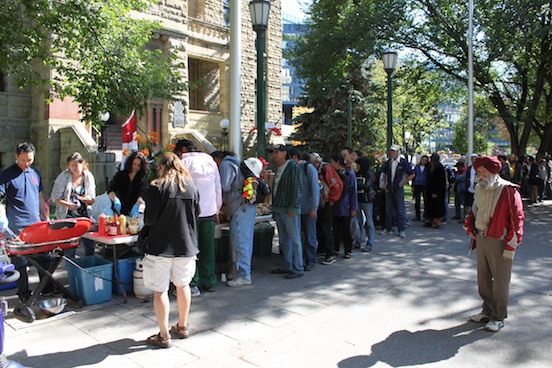 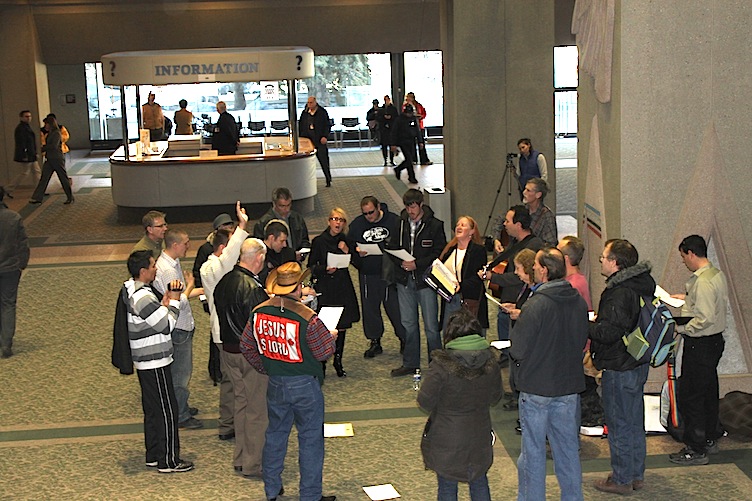