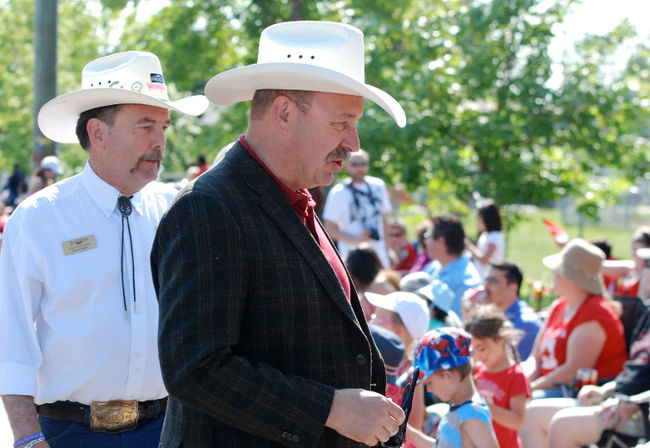 The annual Airdrie Canada Day parade had a high-profile participant.

McIver’s involvement followed a media storm that occurred in mid-June after he was involved with the Calgary March for Jesus, organized by street preacher Art Pawlowski.

McIver made a statement apologizing for his lack of due diligence several days after his involvement with the march.

“What I did not do and what I regret and what I apologize for is I did not do my homework,” he said. “It turns out there is an ugly website attached to it and I am just angry about it.”

McIver was joined in Airdrie’s parade by Allan Hunter.

“My job is not to condemn, my job is to love and support people and make sure they are not judged by anyone,” said Hunter when asked why he marched with the APS. “They were all human beings I was walking with.”

According to a statement penned by Elizabeth Hough-Metcalf, president of the APS, McIver was invited to take part in the parade as part of a public call for volunteers via social media.

“APS does not endorse nor support any political party or candidate,” read the statement.

“However, all people, including those affiliated with a political party or candidate, are welcome to participate as any of the following: members, friends, and supporters of the (LGBTQ) community. We see all our participants as a positive force in providing a safe and respectful environment in which individuals are able to freely express their diversity and pride, especially on Canada Day.”

McIver, who is vying to take over former premier Alison Redford’s spot, is campaigning against former cabinet minister Thomas Lukaszuk and former federal minister Jim Prentice, widely believed to be the frontrunner.

The Calgary MLA, who claims to be on the conservative side of the PC party, said he will continue to campaign until the September vote.

“It’s a tie until people start voting,” he said.

“I am talking to Albertans about protecting their future and about making sure their children as well as their grandchildren have the same opportunities as we do today.”

— With files from QMI Agency