“Closed-mindedness or intolerance have no place in the PC [party].” —The PC party’s response to Ric McIver’s participation in the March for Jesus led by anti-gay pastor Artur Pawlowski.

Instead of belabouring Ric McIver’s pathetic too-little, too-late apology for participating in last Sunday’s March for Jesus (led by Pastor Pawlowski who says gays are agents for Satan) let’s focus on the Progressive Conservative Party’s response to Mr McIver’s participation in this appalling spectacle. 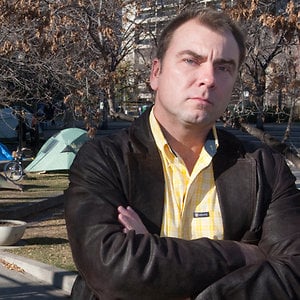 On Monday PC party president, Jim McCormick, shot out a statement saying “individual members…are expected to follow our statement of principles, which includes that of being an open party that’s accessible to all Albertans.”

Well, a certain “individual member” who happens to be running for the leadership of the party did not follow PC principles and Mr McCormick, who was quick to smack down a sitting premier, Alison Redford, is doing absolutely nothing about it.

On Wednesday, Premier Dave Hancock characterized Mr McIver’s participation as oversight. “Sometimes we don’t necessarily get all the background on things, and I won’t chastise anybody for something they may have done not having the full picture”. He urged leadership candidates “to be careful how you associate, because people will make assumptions that you can’t control”.*

Not having the full picture….? Mr McIver participated in the Walk for Jesus for four years. It defies reason that he was not aware of Pastor Pawlowski’s homophobic views.

What did they talk about as they marched down the street arm in arm…the Pope? No wait, Pope Francis said “If a person is gay and seeks God and has good will, who am I to judge him?”**The weather? Well okay, maybe the weather. Pastor Pawlowski did say the 2013 flood was caused by God “weeping for the perversions of homosexuality”.***

Trust me, Albertans have “the full picture” and it isn’t pretty.

The PC government made it crystal clear that it would not protect the rights of LGBTQ students when it refused to support a motion put forward by Liberal MLA, Kent Hehr. Motion 503 would have required school boards to support LGBTQ students with policies that allowed students to create gay-straight alliances. NOTE: Mr Lukaszuk voted in favour of Mr Hehr’s motion. Mr McIver and Mr Hancock were absent.

Much to the PC’s surprise, the government’s Neanderthal response to this motion created an immediate backlash. In an effort at damage control Justice Minister Denis (who was photographed with Pastor Pawlowski in 2012) quickly rolled out a one-time grant from the Civil Forfeiture Fund—a grand total of $76,250—to the Edmonton Pride Centre for a mentoring project to encourage LGBTQ youth to avoid a life of crime by developing relationships with LGBTQ adults who would help them develop safe and positive community connections. The program expires in 2 years.

So the PC party message is this: It has no issues with MLAs who support anti-gay ministries. Remember it green-lighted Mr McIver’s nomination when he ran in Calgary-Hays, by then he’d already participated in at least one March for Jesus, and looked the other way when he continued to do so. It responded only after the issue exploded in the twittersphere. It whitewashed Mr McIver’s participation as an oversight. And it will allow Mr McIver to continue his bid for leadership of the PC party which means it is prepared to take the risk that Mr McIver will be sitting in the premier’s office this fall.

But this should be of no concern to the LGBTQ community because the PC government has given the Edmonton Pride Centre $76,250 (!!)

Frankly this makes Danielle Smith’s decision not to dump MLA candidate Alan Hunsperger—who said gays and lesbians are doomed to an eternal “lake of fire” unless they changed their sexual orientation—look like an administrative hiccup.

Gay rights in the 21st century The corporate world has embraced gay rights. Over 90% of Fortune 500 companies have policies against homophobic discrimination.****Employees who violate these policies are disciplined or terminated. Lord Browne, former CEO of BP, who kept his homosexuality hidden for decades, says this is good business—firms that embrace gay rights will win the war for talent by being able to attract gay employees as well as gay-friendly employees.  Firms that don’t will be left in the dust.

The same principle applies in government. So why did Premier Hancock make feeble excuses for Mr McIver and why did the PC party allow Mr McIver to stay in the leadership race?

Two possible reasons: One, the PC party knows that Mr McIver reflects the views of many PC members and prefers to tread softly rather than risk losing these members to the Wildrose. Two, the PC party thinks that keeping Mr McIver in the PC leadership race will split the “old guard” vote between Mr Lukaszuk and Mr McIver, thereby guaranteeing a win for Mr Prentice.

This is cynical and short sighted.  Refusing to remove Mr McIver from the leadership race confirmed something most of us suspected. The PC party will do whatever it takes to stay in power, including sacrificing the rights of LGBTQ Albertans.

Welcome to the dark ages.