PC leadership candidate says organization behind the parade has ‘nasty, mean-spirited stuff’ on its website

Ric McIver, PC leadership candidate, speaks to the media on Thursday to apologize following criticism of his participation in the March for Jesus. (CBC)

PC leadership candidate Ric McIver says he is sorry for drawing attention to a website that condemns homosexuals.

He was criticized this week for taking part in the March for Jesus event on Sunday in Calgary.

The group sponsoring the march has comments posted on its website making references to people of “wrong sexual preferences.”

Today in Calgary, McIver said he made a mistake.

“What I did not do — and what I regret and what I apologize for is — I didn’t do my homework. I didn’t check the website,” said McIver. “Anybody that’s angry, I agree with them. [There is] nasty, mean-spirited stuff on this website that there’s no excuse for and I apologize for drawing attention to it.”

McIver said he developed a relationship with the group while he was on Calgary city council. He used to stop by when the organization held barbecues outside City Hall to feed the homeless.

He said this is the end of his relationship with the March of Jesus.

Today is the first time he held a press conference to address the controversy. Reaction to the incident was swift after it became public earlier this week.

Reaction was swift earlier this week

A statement from Progressive Conservative Association of Alberta president Jim McCormick on Monday said that tolerance and acceptance are vital to the province.

“Individual members are expected to follow our statement of principles, which includes that of being an open party that’s accessible to all Albertans. Closed mindedness or intolerance have no place in the PCAA.”

The other candidates vying to be Alberta’s next premier also released statements.

“He has spent his entire career advocating for the individual rights of Canadians and Albertans, and also for the rights of our communities of faith, Aboriginal Canadians, and learning disabled children,” read the statement.

“My own views on human sexuality are on the record,” he said. “I have been an advocate for individual rights, I have initiated ground-breaking projects to end homophobic bullying, I have supported Camp fYrefly and other programs for young people struggling with their own identities, I supported changes to Alberta’s birth certificate requirements for transgendered Albertans, and I voted in favour of gay-straight alliances. I am proud of this record.”

Nothing Civilized About Bylaw That Targets Homeless 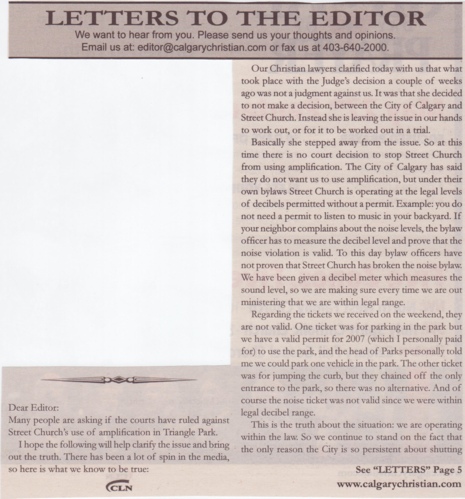