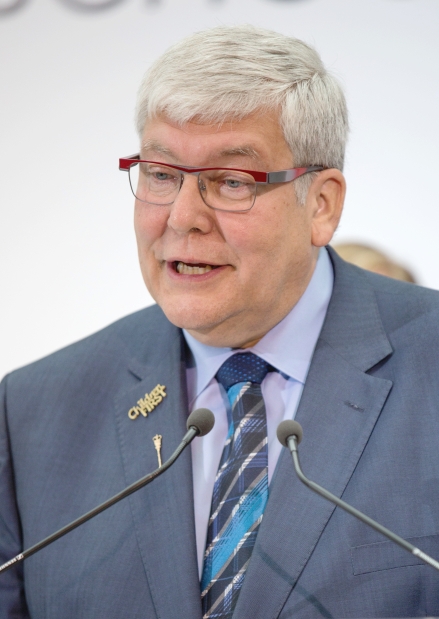 Premier Dave Hancock is telling Tory leadership candidates to be more careful when choosing which events to attend, in light of Ric McIver’s decision to join a march led by a vocally anti-gay religious group.

“Sometimes we don’t necessarily get all the background on things, and I won’t chastise anybody for something they may have done not having the full picture,” Hancock said Tuesday at a University of Calgary funding announcement.

“But I do think in public life you have to be careful how you associate, because people will make assumptions that you can’t control.”

Premier Dave Hancock said Tuesday that “in public life you have to be careful how you associate, because people will make assumptions that you can’t control,” after leadership hopeful Ric McIver sparked a firestorm of controversy by joining a march led by a vocally anti-gay group. Photograph by: Crystal Schick , Calgary Herald

McIver faced a storm of criticism on social media after he participated in the March for Jesus this past weekend with a group whose website states that homosexuals are led by Satan. McIver cut the ribbon to start the annual march headed by street minister Artur Pawlowski, who claimed last year’s flood in southern Alberta was caused, in part, by God’s unhappiness with gays, saying God was “weeping for the perversions of homosexuality.”

McIver initially responded with a statement on his Facebook page explaining he was celebrating his Roman Catholic faith with other Christians.

But Hancock said Tuesday that “celebrating the positives of our religions does not take us to a place where we can use that to promote hatred.”

Hancock added “the homophobic sentiments expressed on the website are deplorable,” but that he also doesn’t believe that the website reflects McIver’s views.

“Our government and I as an individual have very strongly supported inclusion and the idea that Albertans should have the right to be who they are and celebrate who they are.”

“It’s something we can do in an inclusive society to demonstrate that everybody belongs in this province. and they have a right to be who they are.”

McIver relied on an online statement to speak for him as controversy roiled Monday, saying he will “continue to defend equality rights.”

He went further Tuesday, calling the Street Church website statements “disgusting” and that gay, straight and lesbian Albertans were right to be angry.

“It’s not something I have control of, but I tell you I’m as angry as everyone else is, and it’s unfortunate it’s got this much attention,” McIver told Global News.

Leadership hopeful Jim Prentice said Tuesday that if he becomes premier he won’t allow anyone with intolerant values to remain in his caucus.

“My record is clear. I’ve spent my entire professional life fighting for the rights of others, including same-sex marriage, learning-disabled children, First Nations and communities of faith.”

Wildrose Leader Danielle Smith said all the Christian friends she has spoken with are horrified at the website comments and McIver needs to explain his association.

“It’s beyond the pale. It’s extreme,” she said in a conference call with reporters. “I think Albertans expect that political leaders will stand up against this intolerance.”