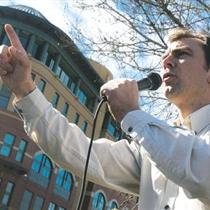 A deadly run-in that ended with two men killed in a notorious downtown park may have started over $60.

Police have identified the victims of Friday’s double homicide near the Langevin bridge and are notifying next of kin. Homicide investigators are saying little about motive and suspects, but word on the street is pointing to deadly stabbings over drug money.

Autopsies on both bodies are scheduled for this week.

Friends who identified one of the victims as Greg said he’d been supplying marijuana and crack cocaine to dealers. The second victim, Christian, was also a street-level dealer.

One had a slash wound to his side, and the other to his neck.

Both victims were declared dead at the scene.

The green space around 4th Avenue and 4th Street S.E., known as Needle Park, is haven for drug dealers and users.

Police said they have people in custody, but no charges have been laid.

Boyer, a self-described reformed drug dealer who now volunteers for the Calgary Street Church, was with the group for a community barbecue at the park Friday night.

A woman ran up, screaming for help for the two stabbing victims.

On Sunday, Art Pawlowski, pastor with the Calgary Street Church, returned to the park and responded to the deadly violence through a sermon.

"It is about the value of life. They were really listening. I think it’s cooled them off a bit," said Pawlowski.

Boyer said the level of violence among the park’s population is rising.

"When I was dealing, I did have my jaw broke. I had a knife pulled on me. I was in scary situations. It was getting worse, and now it’s unbelievable."