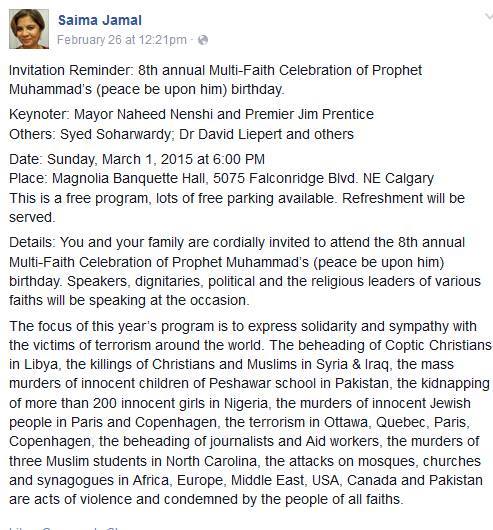 Calgary! See whom you have elected!

Naheed Nenshi, Mayor of Calgary spoke at the birthday party of a murderer, paedophile and a hater Muhammad, right here in Calgary.

Good job Calgarians, you know how to elect the best!

From the Facebook page of Saima Jamal, about this event: “A multi-faith celebration of Prophet Muhammad’s (peace be upon him) birth, life and the message.”

What is this birthday boys message: “Wipe out the Jews, murder Christians, rape women and slaughter all homosexuals.” Good job Mr. Nenshi for celebrating this guys birth, life and the message.

Dr David Liepert, President of the Calgary Islamic Chamber Institute at the prevention of radicalization and extremism event on Mar 1 2015 — with David Liepert.

Judge Mahoney of Court of Queen’s bench said what happened in Quebec with the lady who was asked to remove her hijab would never happen in Alberta because of our values of celebrating our diversity and reserving our charter rights even in court. This is at the prevention of radicalization and extremism event on Mar 1 2015

“A multi-faith celebration of Prophet Muhammad’s (peace be upon him) birth, life and the message. This was a unique program hosted by Islamic Supreme Council of Canada. Thanks to Syed Soharwardy and his team for such an extensive program that included several speakers from the Jewish, Christian and Islamic faiths. Within the Muslim communities the program will be attended by speakers from Muslim Council of Calgary, Hussaini Association, Ismaili Association, Bohra Association, Calgary Islamic Chamber Institute, ISCC and Bab-Ul-Hawaij Islamic Centre.

What next Mr.Naheed Nenshi? You will celebrate the the birth, life and message of Adolf Hitler or Kim Jong-Il? They were also great murderers.

God, please forgive their wicked ways, lead them to repentance and save them.

Please pray for all of them that the truth and the love of God would change them in the name of Jesus Christ. 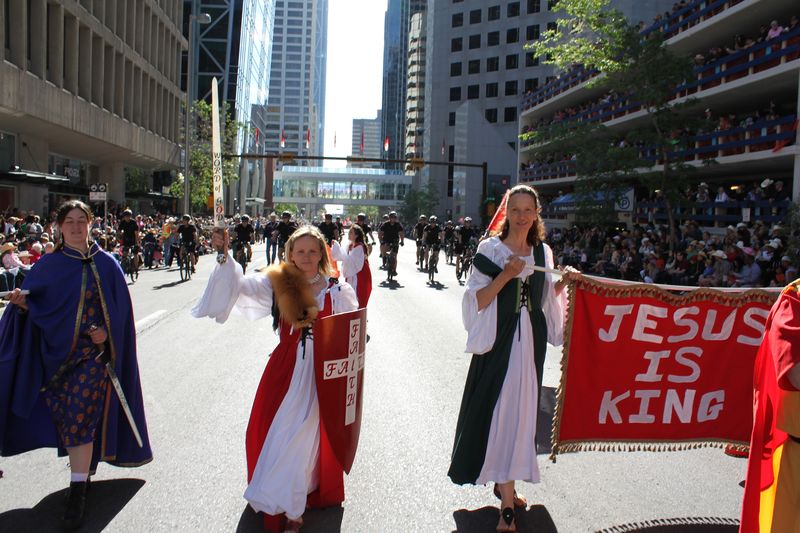