The envoy brought gifts for the Mayor and to their surprise it also happened to be the Mayor Huldai’s birthday. Pawlowski had the honour of presenting a “White Hat” to the Mayor, and of blessing Him in that he would be a leader of righteousness and of the holiness of God. The other gifts that were exchanged included the Polish, Canadian and Israeli flags, joined together and thus symbolizing unity between the nations. Canadian maple syrup was also given to him.

It is worth mentioning the Mayor’s parents were born in Poland, so Pawlowski exchanged a few words in Polish that sparked some good fellowship and joy between them both. The Pawlowski envoy also brought a special greeting from the Parliament of Canada expressing Canada’s devoted friendship with Tel Aviv and all of Israel.

Pawlowski and Hughes asked the mayor for permission to bring March For Jesus to the nation of Israel, which would be held in the city of Tel Aviv. The Mayor responded with complete support. He presented Pawlowski with a “passport” to the city as a gesture of friendship and mutual support. The Mayor also asked the “ambassadors” from Canada to become partners with the “Friends of Tel Aviv” organization.

The friendly meeting ended with a video recording of Mayor Ron Huldai thanking Canadians for their friendship and support. 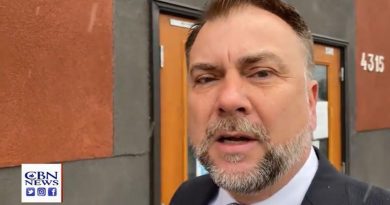