I’ll start with a confession. I quite like Ric McIver.

I know he has some socially conservative views that flow from his deep faith as a Roman Catholic. We don’t share those views. But with Ric, what you see is what you get. He doesn’t pretend.

The equality of gay Albertans has been a sensitive issue at least since the 2012 election, when the Wildrose Party drowned in a Lake of Fire of their own construction. Politicians since have been particularly vigilant to ensure that their words – although not always their actions – carefully respect the equality of gay and lesbian, bisexual, queer and transgender citizens.

A recent chance for Alberta MLAs to put action to words was a motion from Liberal MLA Kent Hehr to make Gay-Straight Alliances mandatory in schools if students request them. McIver was not in the Legislature to vote, but not surprisingly was not a supporter of the motion.

(Aside: Jim Prentice, of course, is not an MLA but his moment came in 2005 when the federal Liberal government introduced C-38, the Civil Marriage Act, to permit gay marriage. Prentice was one of only three Conservatives to vote in favour.)

It doesn’t surprise me to find that McIver was open to an invitation from a group that, on the surface, professes love for Jesus and charitable good works in His name.

But someone on his team should have checked it out before saying yes. If nothing else, street preacher Artur Pawlowski’s name should have been a dead giveaway.

McIver is applying to be the Premier of the Province. This stuff matters.

Will this goof kill his chances?

Voters, especially in a leadership contest, are quite sophisticated. I don’t think most will believe that McIver agrees with the lunatic rantings of Pawlowski.

The risk to McIver is not that people might think he believes this crap. The risk is that PC Party members will fear that the publicity surrounding this event may lead to voters confusing PC values with those established by the Wildrose Party in 2012.

As Faron Ellis points out in his post, Albertans are very progressive on social hot-button issues. The PC Party will not want to risk being seen as otherwise. McIver now needs to create some distance between himself and the Lake of Fire Folks.

May 4, 2016 Artur Pawlowski Comments Off on 25 of MAY, 2016 – American Atheist Challenges Calgary Street Church 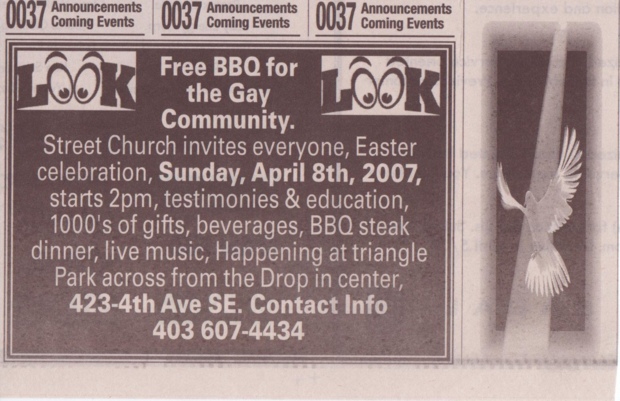 April 8, 2007 Artur Pawlowski Comments Off on Free BBQ For the Gay Community

September 2, 2014 Artur Pawlowski Comments Off on This year’s Calgary Pride Festival gets political