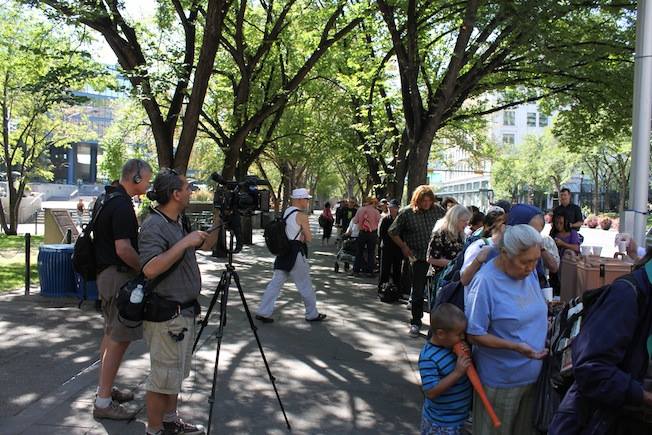 Crews are shown filming Street Church in front of Old City Hall for a new documentary premiering in Calgary on Feb. 1.

“Street Advocate” opens Feb. 1 at the Plaza Theatre, and on Tuesday, Pawlowski said the hour-long expose adds credence to claims coming from his inner-city Christian ministry known as “Street Church.”

“You will see arrests, you will see abuse of power by the police and bylaw officers, you will see corporate security breaking the law right in your face,” he told Metro. “You’ll see testimonies of people that were impacted by the ministry.”

Since 2005, Pawlowski has been ministering in the downtown core and feeding a needy flock in front of Old City Hall. He’s long been at odds with the city over his use of a voice amplifier, among other grievances.

“If I’m such a terrible lawbreaker (then) why am I free?”

Politicians, lawyers and media types are reported to be among those attending Street Advocate’s premiere at the Kensington-area theatre.

Calgary-MLA Ric McIver has promoted the opening-night show online and has openly backed Pawlowski, whom he refers to as a friend.

McIver couldn’t be reached for comment, but he’s seen questioning the controversy around Street Church in a YouTube video.

“It seems to me he’s getting picked on,” he told the filmmaker.

A bureaucratic, political and court addiction to speech suppression