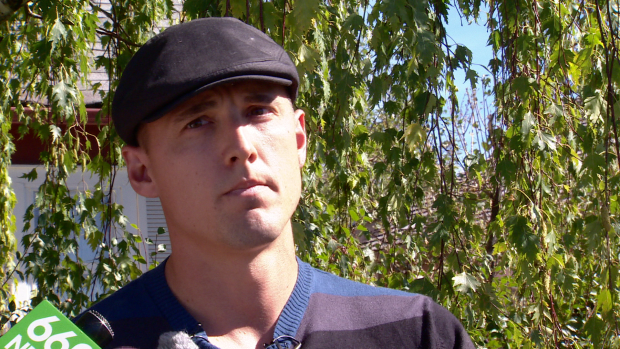 The city says Jesse Rau breached its code of conduct by telling false information to the media about his stance on a rainbow-coloured Calgary Transit bus. (CBC)

Jesse Rau, the Christian bus driver who said he would quit his job with Calgary Transit if forced to drive the city’s rainbow-coloured pride bus because of his religious beliefs, has been fired.

Rau received a termination of employment letter from the City of Calgary on Thursday for breaching code of conduct and the city’s media relations policy.

The letter states: “To be clear you are entitled to your religious beliefs and to express them freely. However, you went beyond that and made false and misleading comments during various media interviews, which resulted in undue controversy and put the reputation of the city at risk.”

Rau has said that he would fight his dismissal, and will be fundraising to hire a lawyer, but he’s not surprised he lost his job.

“So the fact that they fired me, it’s hurtful but like I said from the very beginning I knew that was going to be on the table.”

The controversy has gained quite a following online, with some saying the city did the right thing.

The city said there were two other conduct breaches, including that Rau “repeatedly suggested” the city would make him drive the bus and he would be fired if he refused.

Rau says he was told any bus driver might have to drive the bus, but the city said Rau had been “specifically” told he would not be assigned to the route.

Other reasons for dismissal cite the fact that Rau also made “serious” allegations that people in position of power were out to “sabotage” him and he used social media to post Nazi-related content and identified himself as a Calgary Transit employee.

Calgary Transit director Doug Morgan says there are nine policies in the city’s code of conduct that address everything from media relations to respect in the workplace. The city’s social media policy is that public statements reflect the values put forward by the City of Calgary and council.

“That policy is there to guide that discussion and make sure that if we are representing the City of Calgary that it indeed reflects the policies of the city,” Morgan said.

Calls from CBC News to the union that represents Calgary Transit employees have not been returned.

Rau was still on probation when the controversy began. The letter states he is unsuitable for employment and his status will be “do not rehire.”

Street preacher exonerated; judge says the way he was handled was an abuse of power