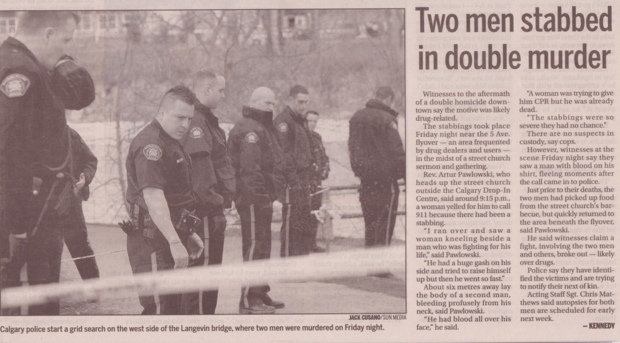 Witnesses to the aftermath of a double homicide down¬town say the motive was likely drug-related.

The stabbings took place Friday night near the 5 Ave. flyover – an area frequented by drug dealers and users in the midst of a street church sermon and gathering.

Rev. Artur Pawlowski, who heads up the street church outside the Calgary Drop-In Centre, said around 9:15 p.m., a woman yelled for him to call 911 because there had been a stabbing.

"I ran over and saw a woman kneeling beside a man who was fighting for his life," said Pawlowski.

About six metres away lay the body of a second man, bleeding profusely from his neck, said Pawlowski.

"He had blood all over his face," he said.

"A woman was trying to give him CPR but he was already dead.

"The stabbings were so severe they had no chance," There are no suspects in custody, say cops.

However, witnesses at the scene Friday night say they saw a man with blood on his shirt, fleeing moments after the call came in to police.

Just prior to their deaths, the two men had picked up food from the street church’s bar-becue, but quickly returned to the area beneath the flyover, said Pawlowski.

He said witnesses claim a fight, involving the two men and others, broke out likely over drugs.

Police say they have identitied the victims and are trying to notify their next of kin.

Acting Staff Sgt. Chris Matthews said autopsies for both men are scheduled for early next week. 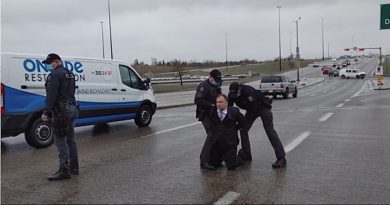