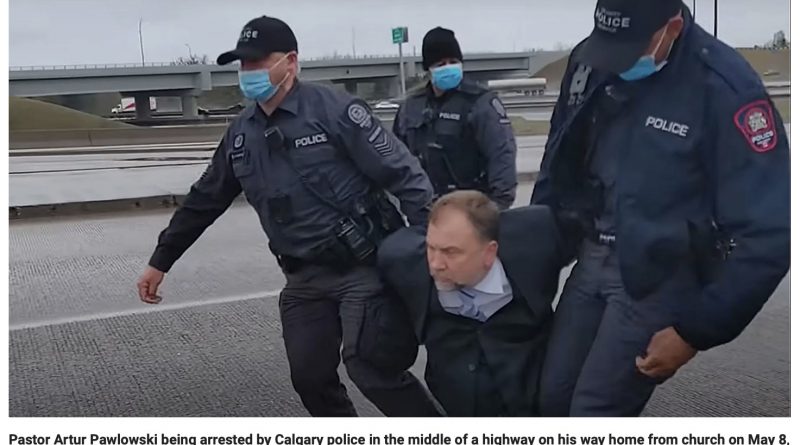 A Canadian judge issued a stay against a court order that compelled a Christian pastor to echo government health officials whenever he speaks publicly about COVID-19 and vaccines.

Pawlowski has warned Americans that he believes the compelled speech he has been subject to in Canada will take root in the United States as well.

Pending an expedited appeal in June of Germain’s original judgment, Strekaf also stayed an order forbidding Pawlowski from leaving the province of Alberta.

Strekaf’s ruling is the latest development in Pawlowski’s ongoing tussle with Canadian authorities. The pastor faced a civil contempt charge for holding church services in violation of a court order that forbade organizing, promoting or attending an “illegal public gathering.”

He also faced a contempt charge for throwing armed police out of his sanctuary when they attempted to inspect it for COVID-19 compliance during an Easter service in April, which first drew him international attention.

On May 8, a motorcade of Calgary police vehicles pulled over Pawlowski and his brother to arrest them in the middle of a highway on their way home from church. They were imprisoned for three days.

During an interview with Fox News Digital, Miller described Germain’s provision as “bizarre” and “likely unconstitutional” under Section 2 of the Canadian Charter of Rights and Freedoms, which guarantees freedom of expression.

Explaining her line of reasoning, Miller said, “Once you caveat your speech with things that you don’t believe, how do you rectify that if an appeal is granted?” Losing 18 months of potential travel time is also irreparable, Miller maintained.

Strekaf agreed, writing, “Without deciding the issue, I am satisfied that the applicants have demonstrated that the qualified speech provisions and the travel restrictions arguably affect their mobility rights and rights to free expression guaranteed by the Charter of Rights and Freedoms.

“If these are set aside on appeal, the impairments cannot be remedied and thus constitute irreparable harm,” the justice added.

Miller lauded Strekaf for staying what she described as “the most offensive” portions of Germain’s ruling.

“So in that sense, it’s a win,” Miller said. “Because we’re getting somebody who’s listening to the facts and applying the law appropriately.”

Strekaf left in place the tens of thousands of dollars in costs and fines levied against Pawlowski, as well as the hours of community service he is required to perform with a government-approved organization, which does not include the charity he founded that feeds thousands of homeless people in Calgary each year.

‘It’s a repetition of history’

Pawlowski told Fox News Digital that Strekaf’s ruling is the “the beginning,” and described the conditions Germain placed on him as “straight from a totalitarian regime.”

In October, Germain sentenced Pawlowski to 18 months of probation, one condition of which required the pastor to recite a script parroting “the majority of medical experts in Alberta” regarding social distancing, mask-wearing and vaccines, even when he speaks in church.

CANADIAN PASTOR DEFIANT AS JUDGE ORDERS HIM TO PARROT ‘MEDICAL EXPERTS’ FROM PULPIT: ‘I WILL NOT OBEY’

“This compelled speech—straight from Soviet Russia or North Korea—was un-Canadian, illegal and undemocratic,” said Pawlowski, who is glad a higher court saw fit to block the order.

Germain had also banned Pawlowski from leaving the province after taking particular umbrage at his summer speaking tour throughout the United States, when he met with lawmakers and warned large audiences that Western governments increasingly resemble the communist regime in Poland he fled as a young man.

When Pawlowski returned to the Calgary airport in September following his tour, customs officials were waiting to cuff him on the tarmac. He told Fox News Digital at the time that Canadian border police confiscated his belongings and there was evidence they had accessed his personal computer.

Since the pandemic, churches throughout Canada have faced imprisoned pastors, locked facilities, steep fines and continued interference from government officials.

In June, Sen. Josh Hawley, R-Mo., called on the U.S. Commission on International Religious Freedom (USCIRF) to consider adding Canada to its special watch list because of how pastors are being treated in the country.