We seldom get a chance to chat which means that you are not always aware of the number of salvations that happen.

On Sunday, 3 were led to the Lord and about 8 people received prayer. One was a native man who practically ran after me to give himself to the Lord. A second was another native man who was quite impaired. A third was young girl (Carly) who was hooked on Crack. She accepted the Lord and her healing from Crack. On Monday night, she returned to report that she had a continuing wonderful experience in the Lord and had not even been tempted by Crack. She was still feeling that supernatural peace upon her.

A second couple (Eric & Pam) came up to me who I had led to the Lord 3 weeks ago. The commonlaw wife was delivered from a demon call Lust and renounced her childhood vow to never forget when her father raped her at 4 years old. She was set free from all hurt associated with that event or any since, and she was set free from all soul ties to previous sexual partners including her common law husband. We dedicated her unborn baby to the Lord. Her commonlaw husband who was acholic quit drinking and passed out on the 3rd day with a concusion from falling on the sidewalk, he ended up in Rocky View hospital to recover from withdrawal symptoms in a clean and controlled environment. They showed up on Sunday scrubbed clean and well dressed to tell me that they were moving to BC and both had a rent free cabin to live in and had work for both of them during and after the pregnancy.

Eric still hadn’t had a drink since his concusion.

One man Vince who I led to the Lord one week ago came up to me and reported that all kinds of doors opened up for him. I drove him to the Calgary Dream Centre and he will do an interview to register in for a 6 month Life Skills program in a spiritual environment. We had Thanksgiving dinner together at the Dream Centre. I remember the despair he originally showed up with and how it contrasted to his peaceful condition filled with gratefulness on Sunday. From his lips, "God is good, God is great".

Monday night. 5 were led to the Lord, 4 were prayed for.

One man who gave his life to the Lord two Sundays ago and was baptized in the Bow returned with a woman friend and asked me to pray for her. She allowed me to pray for her but wasn’t ready to give her life to the Lord. He harboured much pain and bitterness against God because she still blames him for taking her mother and younger sister. She wasn’t ready to listen yet.

There is much reward in what we are doing on the street and I see change happening.

With the cold coming up, I wonder if we could find a cheap source of warm cotton hoodies, white, black, and grey to hand out. If you come up with a Street Church logo and a scripture to put on each shirt, the Word of the Lord would be preached on the street in our absence, and His Love would be expressed in providing these warm shirts. I would be willing to buy a few dozen.

What do you think? 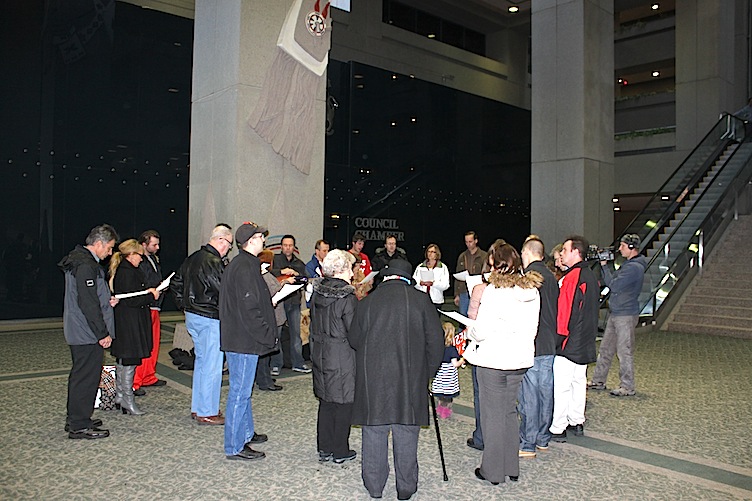