We’re happy to announce the big-screen premiere of the movie “Street Advocate” which will have its Canadian premiere at an event screening at Calgary’s “Plaza Theatre” (1133 Kensington Road N.W. Calgary, AB, Phone: 780-399-4477) on Saturday February 1st, 2014, at 6:30PM. To order your tickets ($12.00 for adults, kids are free) please send an e-mail to [email protected]

The documentary is currently making its way through the 2013 film festival circuit and has already won an award at one European movie festival. All proceeds from the sale of the tickets and DVD’s will go towards feeding and taking care of the homeless in the city of Calgary.

They spent countless hours interviewing people from different fields about Street Church and its ministry. Everyone ranging from politicians, lawyers, reporters, members of the police department and the mayor’s office to the homeless served by the church and members of the public who passed by Street Church services were asked about why there is so much controversy, opposition and resistance towards a peaceful ministry that feeds thousands of the less fortunate on the streets of Calgary. Particularly, they focused on why there is a tremendous and open hostility against Street Church from the municipal government.

During the two weeks, the filmmakers witnessed and recorded firsthand what motivates and empowers the volunteers to stand for truth and in defence of human rights. They witnessed many lives being impacted during their time in Calgary through prayer, salvations, and the meeting of basic needs such as food.

In the documentary, Street Church volunteers are seen enduring and overcoming many obstacles in their mission. The documentary shows these volunteers being harassed, intimidated, handcuffed, arrested and taken before the courts by local authorities for simply standing up for their constitutional rights. It records their service to the poor despite rain, snow and freezing weather. As well, it shows the bravery of volunteers in the midst of attacks by local gangs. The film captures how they have managed to keep their faith throughout and continue with the mission they were called to do.

The film also features never before released archive footage of the miraculous recovery of a boy named Nathaniel whom doctors labelled a “Star Baby” because they declared that he would not survive. Born with smashed lungs, a heart located on the opposite side, stomach and bowels in his upper chest, Nathaniel had all odds against him.

This production was filmed at various locations such as Lake Louise, Drumheller, Calgary, Hobbema and Warsaw, Poland. The film was shot by cameraman Alex Pavlović and it is produced by Henryk Dedo.

The finished documentary will be shown in Europe and North America and will be featured at over fifty film festivals.

The finished movie will come out by the end of this year.

Festivals at the Steps of City Hall 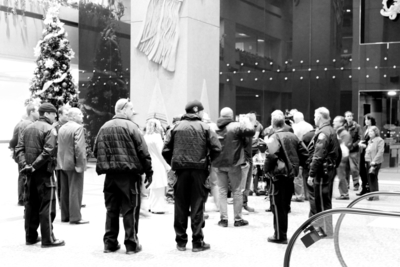