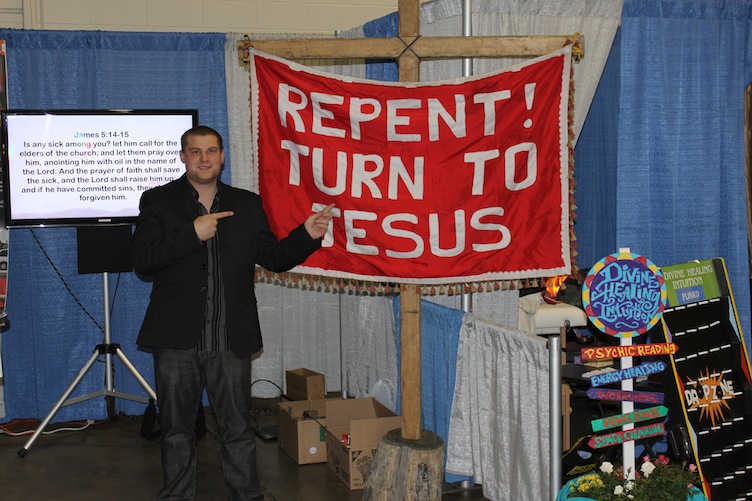 About a week ago I was inspired to book a booth at the Body, Soul & Spirit expo to be held down at the Big Four building on the Calgary Stampede grounds. I thought this would be a great opportunity to spread the Gospel with the attendees and exhibitors alike. I paid for the booth myself and invited a couple of others to join with me to work the show. The show started at 3PM this afternoon and was to run all weekend.

But at around 5:30PM Artur Pawlowski, Nick Bicak and myself were praying for a lady and spreading the Good News of Jesus when a number of armed police officers along side of three security guards and two Calgary Stampede personnel approached our booth and stated that we were trespassing on the property and had to leave immediately or else we would be arrested. Artur challenged the officers and stated that Nick and I were being harassed simply because we were “guilty by association”. Of course this is not a crime in Canada because we are assured by our Charter of Rights and Freedom, the freedom of association – this is a fundamentally guaranteed right. Art agreed to leave but challenged the authorities as to why Nick and I had to also leave. The police told us that they were not there to discuss the situation. We all had to go. We were shortly escorted out of the building and not allowed to take any of our equipment and show supplies with us. All three of us received summons for trespassing and were told that we are never allowed back on Stampede property, ever again! Wow… I have been a Calgarian for 36 years of my life! There is one exception to this order… we will be going back at 9PM with a police escort after the expo is closed to pack up our equipment.

Although as a group we are disappointed that we are not able to complete the expo, we did reach quite a few people and several of them were healed. Folks were asking us what the cost was for our services, it was funny. We told them that everything we had to offer is free! Jesus healed a lady with neck pain, a Sikh lady was completely healed of her serious neck problem and she and her friend then eagerly listened to my testimony. A woman with frequent headaches was healed of her current one, and another woman with arthritis was healed of pain in her neck and hip. To top it all off, a couple of people we prayed for received Christ. And to think we were just getting started! I should mention that we were surrounded by all manner of psychics, tarot card readers, witches, and every other type of worldly confusion that you can think of. God is great and His light was shining through us!

Tonight I received a taste of worldy justice. Not only was I ejected from a public place for simply knowing another citizen, but I am also now penalized financially because of this and facing a real possibility of never seeing a refund for the booth rental. Besides this, now we must defend ourselved in a court of law for simply exercising our rights. What a shame that our country is regressing into such a sad state. I simply invited Artur to help Nick and I with our booth and this is what happened.

It is obvious that someone was very upset at our presence there tonight. Think about it. The name of Jesus was lifted very high. The flag of Israel as well. Prayer, healings, and salvations in the name of our Lord. This is something that the enemy cannot stand. But this is where the light shines the most… Right in the middle of darkness.

Video of the event:

Artur Pawlowski, Franklin Graham and Michael W. Smith are joining forces in Warsaw for the biggest evangelistic crusade in the history of modern Poland.