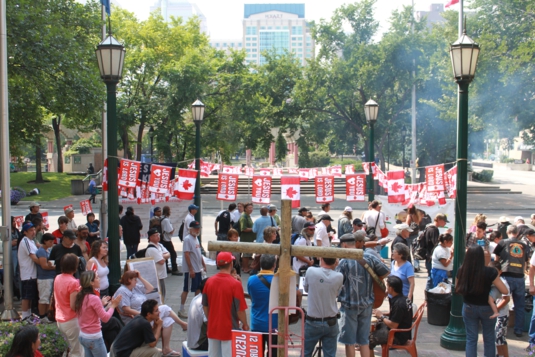 We are all familiar with this quote, “MAN SHALL NOT LIVE ON BREAD ALONE, BUT ON EVERY WORD THAT PROCEEDS OUT OF THE MOUTH OF GOD.” Matthew 4:4, and it’s true. But, see the point Jesus makes here, he is not saying that we should live without bread, but rather not on bread alone. What does that mean, simply speaking, we all need “bread” to survive, but we also need more. God is a Father that understands perfectly what man needs. In the scriptures, Jesus teaches us how to pray by saying, “give us this day our daily bread”.

When we look at the scriptures God is perfectly clear that true love is manifested in action; in other words, whatever your passion is, that is what you will pursue. I know that we are called to obey, and usually this starts with simple little things. This is the story of Street Church.

I remember years ago, when all of us had to chip in a few dollars, so that we could afford a few pizzas to give away to the homeless along with the word of God. At that time, no one even imagined, that one day the ministry and its volunteers would be able to preach to millions of people around the world. We also didn’t realize that, that was God’s beginning of testing. One day He told me, “do not despise small beginnings because they are huge.” It reminds me of a question that I asked someone, “What is bigger a grown up person or a baby at conception?” Of course, the answer is simple and obvious. The beginning of life is the biggest miracle that here on this earth we can experience – LIFE. Everything else is built upon this foundation.

Through the various persecutions, call them adventures, I came across different comments and write ups on the Internet that suggest that instead of defending our rights, we should be doing something more productive. For example, why don’t we feed the poor or do something for humanity? Why not take care of those that cannot take care of themselves? How about giving hope to the hopeless? Of course those statements are really ridiculous and ignorant, those that make them don’t even have the decency to check for themselves what this ministry is all about. Assumptions and biased point of views are not helpful and in the end those that make those statements prove themselves to be fools. It’s not wise to speak about something that you yourself know nothing about.

Street Church’s existence is a story about what God can do with those of His children that are committed to obeying. God’s heart is stretched toward the poor, widows, and orphans and it’s no wonder that He fulfills His word when He says, “whoever gives to the poor lends to God”. The volunteers at Street Church are little people in the eyes of men with a powerful and big God on their side.

Here let me boast, not about what a man can do with huge resources and powerful allies, but about what a powerful God can do with a submissive heart and faithful stewardship. We do not receive support from any arm of the government, even being denied the right to have charity status, which would enable us to give receipts to those who give to the ministry. Yet, against all odds, this is what God does on a regular basis.

Every week we have been blessed to distribute over 600 loaves of bread, thousands of buns and thousands of pastries, hundreds of pounds of meet, not to mention huge pots of hot chilly, soups, clothes and other goods to the poor, on a weekly basis. We support with food five different ministries, also on a weekly basis. Overall, Street Church is able to distribute between $50,000 to $70,000 worth of food per month.

How, I do not know, with man this seems impossible, but with God all things are possible. Through history we can see that when God decides in His heart to raise “nobodies” – faceless, nameless, a generation of willing servants, He chooses to defy all odds through them. Remember, that those small beginnings, in God’s Kingdom are the foundation stones for the future. Through the years of ministry, I have seen so many talented, gifted and anointed people that simply refused to be faithful with what God had entrusted to them. They were eager to go for the big spoils, but not willing to pay the cost of obedience – faithfulness, humbleness, perseverance, desperate dedication, hardship, etc. Without those, how can God build a person’s character, that in the future He would be able to use such a person for great and mighty exploits.

Shallow Christianity, loves just on the surface, but when the difficulty comes, what’s left is just a whining bitter, miserable, wanna be hero of “faith”. Children of God, who are willing to do His work, no matter what the cost will always see the mighty hand of God. One day, when I will stand before the creator of the heavens I want to hear the words, “Enter into my peace my good and faithful servant. Good job. Well done my son.” Let me answer one question that many may be asking – how it’s possible that after seven years of resisting the City’s attempt to destroy us, we are still standing? And not only just merely surviving but growing in blessings and influence.

So, to answer the question, let’s go back to scripture; Proverbs 19:17 states that, “

So we see that God rewards the ones He calls righteous because they follow His commandments. How about you? Are you following His commandments? IF you do, you will defy all odds, if you don’t, today is the day of salvation.

Let me leave you with the words recounted by Pastor Owen C. Carr, founder of Chicago’s Christian Television, that his father told him when he was a young boy, “‘If you’re going to start, don’t stop!’, his dad told young Owen, ‘and if you are going to stop, don’t start!'”

Our Heavenly Father says something very similar, “I wish that you would be either cold or hot…”

Be hot and be on fire for Jesus Christ, He is worthy, then you will see the miracles of His mighty hand!

The prayer of a righteous person

Do you believe that the word God should stay in Canadian culture??