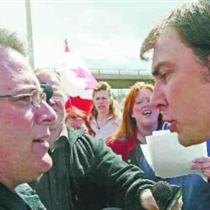 The City of Calgary cracked down on a street church minister Sunday, but bylaw officers backed off plans to seize his public address equipment for fear of sparking a backlash among the minister’s supporters.

A judge has banned the preacher from using amplifiers to spread his message due to noise complaints.

The tension in Triangle Park, where Art Pawlowski sets up his sermons three times a week, rose Sunday after bylaw officers gave Pawlowski the fourth ticket of the day.

That ticket was for having his sound system and amplifiers on the sidewalk.

It was after that ticket that Pawlowski took the microphone and addressed the bylaw and police officers who were in the park.

"Why don’t you shoot us today?" he said.

"I would encourage you officers to start bringing your guns and start shooting Christians today."

A few people in the park tried to follow two bylaw officers, but were restrained by some of Pawlowski’s supporters.

The scene brought an end to an hour of confrontation and preaching that, for some of those waiting in line for bread, pop, yogurt and muffins, ended up being more spectacle than salvation.

"Every time I come here, I find it more of a cult," said John, who didn’t want his last name used.

"Put it this way: if there was no food, I don’t think there’d be anybody here."

Another man named Ed said he was "here for The Word" as well as the food. But he added about three-quarters of the 100 or so who came to the park were only there for the latter.

He noted, however, that shouldn’t be a reason for the city to shut down the street ministry.

"These people have been coming here for a long time," he said. "They’re trying to do a good service."

Pawlowski first incurred the city’s wrath last year after about 100 people — some living in Bridgeland across the river — complained about the noise coming from the amplifiers he uses during his sermons. The city revoked Pawlowski’s right to use the amplifiers.

In December, Pawlowski began a legal challenge, but lost a ruling this month that would have allowed him to use the amplifiers in the interim.

He received a $50 ticket Friday for violating that ruling.

On Sunday, he circumvented the ruling by putting the amplifiers on the sidewalk — "Go and set it up the way we always do," he told one volunteer. But he was ticketed for doing just that and ordered to appear in court.

He also received three other tickets, totalling $365, for bringing a pickup truck onto the park’s grass. A large wooden cross was erected in the flatbed.

Bylaw officers could have towed the truck and impounded the sound equipment, but animal and bylaw services operations co-ordinator Dorlene Hemm said they decided against it. "We felt that it probably would be a better idea not to incite things," she said.

Pawlowski vowed to fight every fine, saying he needed the amplifiers as his message wouldn’t otherwise reach the ears of those in the park.

He also appealed to Mayor Dave Bronconnier to let his ministry preach. "Is the mayor’s heart a heart of stone?