Over the years, Street Church has been through a lot. Think about it; over eighty summons and tickets, officers storming church services, up to thirty in number, the lead pastor, Artur Pawlowski, stood before a judge over thirty-five times, having a warrant for his arrest five times (each time turning himself in), arrested twice, personal visits of authorities to his home, confiscation of Bibles and Christian DVDs during church services, physical attacks of officers on volunteers, intimidation tactics – photographs taken of volunteers and their vehicles and license plates.

Trial after trial, at times from an outside observers perspective it looked crazy, because it was. But, now I can proudly say, as a man who has stood beside this ministry through the years observing all that went on, the battle was worth it. The ministry has now seen breakthrough after breakthrough, not only in what they do as a ministry serving over 150,000 meals per year with the great provision of the Lord, proving His words, that when you give to the poor you lend to God and that you cannot out give Him, but in the courts in defending the rights of Christians. Week after week, I hear reports of salvations and healings coming from the ministry. It’s great to see that, although the trials have been great and the courts have been a challenge and, I’m sure, at times, overwhelming, that the ministry and its’ volunteers have stayed true to the original vision to preach the gospel and to lift the name of Jesus Christ for all to see and hear. Four times a week, when you drive past City Hall, what do you see? A big banner, "Jesus is King", and the Ten Commandments underneath, with a statement in red, "Jesus died for you" along with the words, "restoring Canada’s heritage".

At the gates of the City, our old City Hall, there is the prominent fixture of the old rugged cross, and on both sides of the steps leading up to the building there are two large flags; one that says, "God Lord Jesus Christ, the Only Way to Heaven" and the second, the Canada flag, which proves what the ministry has always proclaimed, that they want Canada to be a nation under the One Living God and for Him to have Dominion from sea to sea. At first, when you see all of it, the line-ups and the poor, sometimes totalling hundreds, you are absolutely shocked, and you ask yourself, "What is this?" It is such an abnormal sight that it catches the eye of all who pass by, from those on the C-Train, to cars driving by, to pedestrians, to people entering and leaving City Hall. People cannot help but see the name above all names, Jesus Christ, to the great joy of the Street Church team. Of course, that’s the reason they are there, with songs of praise, worship, preaching and prayer being the focus, and providing food and clothing as a manifestation of God’s love to the brokenhearted.

For years, the ministry members were thrown out of the churches, being labelled as law breakers and trouble makers by even those within the church community. The cries for help and support from the ministry to the broader community of Christ went more or less unheard. The ministry was trying to tell people that unjust acts were being committed against them and that the police and bylaw officers were overstepping their authority and that there was an agenda being forwarded with a goal to shut down the preaching of the gospel of Jesus Christ. They were told, by many in the body of Christ, to shut up and go home, that they should stop stirring up a hornet’s nest and that they should merely submit to the ungodly and unconstitutional demands of the authorities.

All this is turning around. The first arrest of Artur Pawlowski has left him vindicated with the charges for publicly reading from a Bible being dropped. The arresting officer was charged for writing false statements in official documents. In 2009, the provincial court Judge A. A. Fradsham, was presented with the facts of the case, not corrupted by public opinion, the media or politics. After reviewing the evidence and testimony of all the witnesses, the judge in a 91 page ruling found that the City and its officers, both police and bylaws, had abused their powers over the ministry and its pastor, and that many of the bylaws that were used to fine the ministry were found to be unconstitutional and he indicated that they were of no force and effect. Just after this judgement, both the provincial and federal attorney generals withdrew all of their charges against the ministry, leaving the City and its bureaucrats to fight the ministry alone. Today, April 21, 2010 the crown prosecutor for the City of Calgary officially withdrew all remaining charges against Street Church Ministries and all volunteers.

Recently, Pawlowski was told that the Crown is withdrawing all charges relating to the second arrest. The current trial, regarding "illegally" feeding the homeless and "illegally" gathering a crowd is going very well and there is a great deal of optimism regarding its outcome. The ministry has also seen victories with politicians and bureaucrats, being able to meet one-on-one with MPs, Aldermen, and also to speak with different officials such as Prime Minister Harper and with Premier Stelmach, with a message that is consistent, to challenge them to stand for righteousness and justice.

All in all, the ministry is continuing to fight. I have seen how very difficult it has been, and it’s far from over. Despite the victories, just a few months ago the ministry lost its’ charitable status and for what? For preaching the truth from the word of God, they received a letter from CRA saying that, "members of the board of the directors espouse strong negative views about sensitive and controversial issues, which may also be viewed as political, such as abortion, homosexuality, divorce, etc". Also, CRA, in a sense, criticized the ministry for defending their rights through public protests, through court battles and through articles on the Street Church website. All of this is being done to a ministry that feeds all who come, including homosexuals, divorcees, those who have had abortions, and anyone else who comes to receive, with the understanding that all have a right to the basic necessities of life and to hear of the loving God that provided the way of salvation.

A person has to ask himself, why the waste? Why spend, what we are now told, is over two million dollars, of taxpayers’ money, your money, attacking a ministry that does so much good in the service of the downtrodden and the brokenhearted? I guess we can see clearly what Jesus meant when He said, they hated me, how much more will they hate you because of Me.

In view of all of this Pastor Pawlowski says, "God made us as conquerors with the assurance of victory. He never said it was going to be easy, but He guarantees that all of His promises are available to those who will stand for Jesus’ Kingdom and His righteousness. That’s why we win, it’s His justice we preach, it’s His laws that we declare, he simply confirms them with salvations healings and great manifestations. If we as God’s leaders and pastors, will not stand up against this clearly illegal, according to the Charter, behaviour, this insane evil political correctness will destroy this beautiful nation and its’ children, the next generation. I’m telling you, history has shown us this. Now it’s up to you and me to push back. We are winning just as it says in the scripture – 1 Chronicles 16:21-23 (NKJV) 21 He permitted no man to do them wrong; Yes, He rebuked kings for their sakes, 22 Saying, ‘Do not touch My anointed ones, And do My prophets no harm.’ It’s very simple, if God is for us, who can be against us?"

I would like all to know, that I commend the efforts of Street Church and have been honoured to walk along side their ministry, defending them to naysayers, as they continue to minister to those who willingly come to be served and blessed with the love and truth of God. 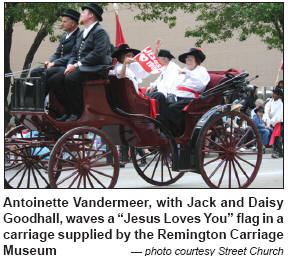