CALGARY – A bus driver with Calgary Transit who faced backlash after telling reporters he’d quit before driving a bus decked out in rainbow colours for the city’s Pride festival explained his actions on Monday. City manager Jeff Fielding responded to the man’s position, saying he was not aware of any formal complaints or declarations involving a refusal to drive the bus.

Jesse Rau said he refused to drive the bus unveiled last week because as a Christian, he can’t condone the behaviours and lifestyles associated with Pride, which he said the Bible calls sinful.

Flanked by his wife and two sons,  Rau said it comes down to a “few people” at Calgary Transit who are trying to impose their beliefs on him and other drivers at a press conference Monday.

“There’s a few people that clearly have taken advantage of the climate right now, where people are afraid to speak out against this radical sexual movement that’s happening for fear of leaving their job.”

Three weeks ago, Rau said Transit officials asked him to remove an anti-pride Facebook post from his personal account. He said he complied with that request.

Rau said after his shift this past weekend, he was told to see a supervisor and was told then that he was texting while driving, which he vehemently denied doing.

He said he loves his job and refuses to quit. When asked if he thought he’d be fired over his comments, he said he didn’t feel he’d get fired because of the current media attention, but then added: “my goose is cooked.”

Fielding said the city expects staff to live up to its standards, code of practices and to “understand the responsibility they have as a city of Calgary employee.”

“We haven’t had a declaration from the employee in terms of whether or not he wanted to drive the bus or not; we haven’t had that conversation,” said Fielding. “Anything that precipitates out of this will be addressed by our code of conduct. If it’s a personnel matter, we’ll discuss that at the time.”

City manager Jeff Fielding said he’s not aware of any formal complaints in the case.

Fielding said there was no discussion to pull the Pride-decorated bus. He said the city is “doing the right things” and feels it has the support of the community.

Meantime, Calgary Pride organizers said Monday its focus is on “celebrating diversity with all Calgarians this week during the biggest Pride in Calgary’s history.”

The Rainbow Pride Bus will travel on Route 2 starting at 4:15 p.m. Monday and will travel various routes throughout the week. 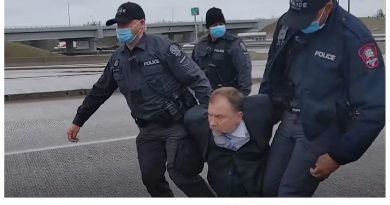