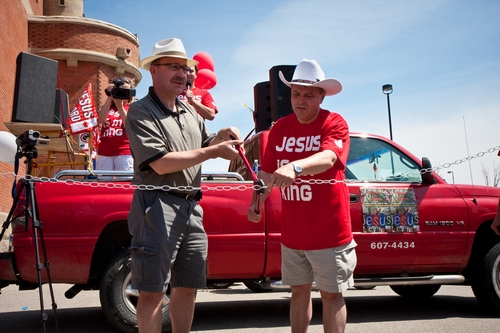 We are living in very interesting times and a lot of things are happening around us. We know that we are living in a time that fulfils the words of Jesus; turmoils, uncertainty and difficulties abound. At this time, during the 2010 elections, we have to be very thoughtful and careful about who we vote for. In the scriptures, God is very clear that we can have leaders over us, that he neither approved nor appointed. I think this is the danger of having someone in an elected position who is not either a Godly man or who openly provokes God to anger or even opposes Him, as we had with Dave Bronconnier for the last several years.

Hosea 8:4"They set up kings without my consent; they choose princes without my approval."

It’s time to pray, to fast and to really seek God’s face when it comes to our municipal election. For my part, I listened to all the candidates, I spent time at their debates, I prayed and I came to this conclusion; none of the candidates are perfect, but in my view, only one stands outs in the crowd by his fruit.

The only person from all the candidates, that publicly endorsed, and came and supported the March for Jesus and the only candidate that stood and fought for our rights as Christians to be at City Hall against a proposed unconstitutional bylaw, was Ric McIver. I know that he is not perfect, but I also know that this is a great opportunity for the church and church leaders to come along side him and to encourage him and embolden him to step up in the areas where he needs to improve. I know for a fact that he both wants to stand for and do the right things for Calgary and all its citizens.  He is the only alderman that would come out and talk to and listen to the concerns of the homeless people, during all the years that we have been doing the Street Church ministry.

I know that many of you hesitate to vote, or some of you may even wonder if it is even worth it. I on the other hand value democracy and my right to vote, but I also consider it my responsibility.

Of coarse I am also looking forward to my King, Jesus, at His return, when He will establish His Kingdom. In the mean time, I as a believer in Christ, have an obligation to be salt and light everywhere I go. Once again, my vote will go to Ric, but I ask you to carefully and prayerfully consider who deserves your vote when you cast your ballot.

At the end of the day, do not fear about the future, don’t be worried. God told us, "not by might, nor by power, but by My Spirit, says the Lord." Like a friend of mine says, "do your best and let God do the rest." I hope you will come as a citizen of this great country and will vote this coming Monday, October 18th.

Here are a few pictures from the March for Jesus, from June 20, 2010 (that the secular media did not cover at all): The Power of The Gospel-Calgary